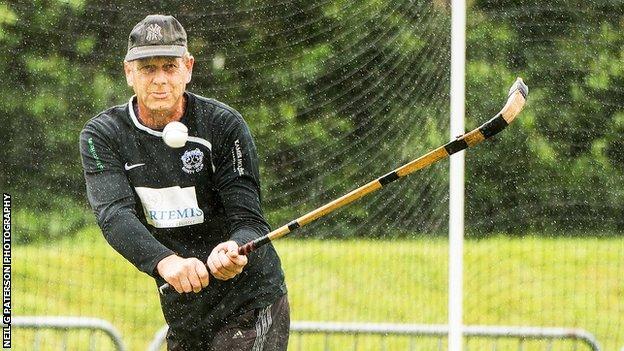 Holders Kyles Athletic reached another Camanachd Cup final after coming from behind to beat Kingussie 3-2 after extra-time in Fort William.

Ronald Ross got the opener for Kingussie in the early of the second half but this was soon neutralised by Thomas Whyte.

In extra-time Savio Genini put Kingussie ahead once more btt this was short lived since Colin MacDonald and Kyles four-goal hero from last year's final Roddy MacDonald sent the Tighnabruich through to the final.

That match against Newtonmore or Fort William will take place at An Aird on 14 September, with the second semi-final on 10 August.

Kyles coach James Perlich said they were delighted to be through to another final but refused to be drawn on which opponents they would prefer when they get there.

The semi-final was followed on the same pitch by Fort William's goalless Premiership match with Glenurquhart, whose keeper and captain Stuart MacKintosh saved two penalties.

There was more misery for Oban Camanachd, who lost 4-0 away to Lochaber to go bottom. Zands Ferguson got a double while Duncan MacKinnon and Shaun Nicholson grabbed one each at Spean Bridge.

At the Winterton, Inveraray, with goals from Lewis MacNicol and Fraser MacNicol, twice went ahead against Kinlochshiel but Sheil struck back through Jordan MacRae and, in the last minute, David Glass for a 2-2 draw.

Barring Beauly turning around a disadvantage of 33 goals in their last four games, Kilmallie will become North Division champions following a 5-4 home win over Caberfeidh. Eight players found the net with the only double coming from Kilmallie's Martin Munro.

South Division 1 has further to go and Glasgow Mid Argyll stay two points clear after their 5-0 victory at Kilmory while their challengers Bute beat Aberdour 3-0 in Rothesay.