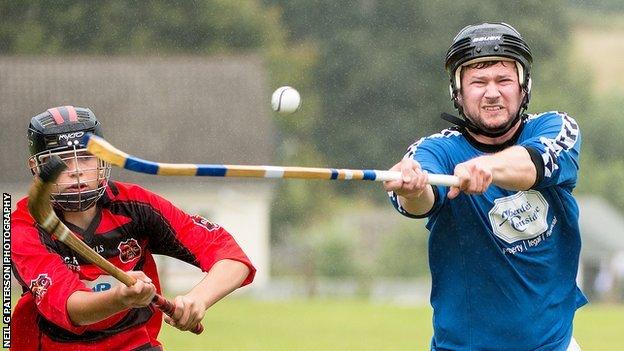 Kyles Athletic lifted the MacAulay Cup at Mossfield Stadium on Saturday after a seven-goal thriller against Newtonmore.

'More's hit man Danny MacRae was first to find the net after only eight minutes to set off the North's blue and white fans. Kyles Athletic's Thomas Whyte however had his very own South blue and white dancing in their seats only four minutes later with an equaliser.

Roddy MacDonald was next on the scoresheet for Kyles, giving the Tighnabruaich men the upper hand leading into half-time.

Not unlike the first half, Newtonmore were first out the firing blocks after the 15-minute interval with MacRae once more bringing the Badenoch side level.

David Zavaroni minutes later set the Kyles supporters' hearts alight with their third, however they had no sooner finished celebrating when Glen Macintosh had the game tied for the third time at 3-3.

Roddy MacDonald went on to the be the hero for Kyles with the fourth and final goal to confirm Kyles Athletic's name on the trophy, whilst collecting the man of the match award to add to his extending collection.

This incredible final was just the start of a string of huge games ahead for these two clubs, however they will still have one eye on shinty's most prestigious prize, the Camanachd Cup.

Both Kyles and Newtonmore will have to wait four weeks though before the blue and white buses of the North and South head once more for Oban to battle it out for the game's showpiece.

Elsewhere, in the Premiership, Lochaber lost their first league match since new manager Robert Johnstone took over in May - a 3-1 away defeat by Glenurquhart, while Lovat's Lorne Mackay's 66th-minute strike was enough to secure a 2-1 victory over Kinlochshiel for the Kiltarlity men.

Fort William travelled to Kingussie in desperate need of two points and secured just that!

Daniel Stewart's 83rd-minute winner was Fort's first away Premiership two-point win of the season and it couldn't have come at a better time.

Fort however lost Duncan Rodger for the rest of the season due to a knee injury which will be a huge blow for the club.

Looking ahead to this weekend's fixtures, in the Premiership, it's derby day!

Kingussie host old rivals and neighbours Newtonmore at the Dell, while Kyles Athletic take on Inveraray, with Oban Camanachd hosting Lovat at Mossfield.

Fort William travel 10 miles North to the best on the west village, Spean Bridge, where they face Lochaber.

Fort William are still in desperate need of points for Premiership survival and, with time running out, must win against the Spean Bridge men at all costs.

A win however for Lochaber would guarantee 2014 Premiership Shinty for the red and white hoops. And, in front of a large local crowd, the stakes couldn't be higher.