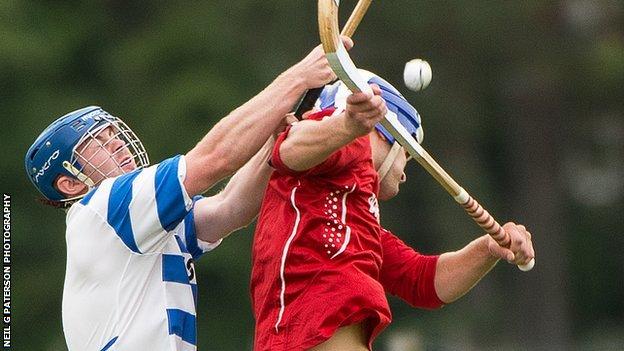 If Newtonmore were seriously rattled by last Saturday's MacAulay Cup defeat by Kyles, they took it out on local rivals Kingussie in the shape of a 6-1 thrashing at the Dell on shinty's Premiership derby day.

The league leaders rushed into a 4-0 lead within half-an-hour through a Danny MacRae double and one each from Glen MacKintosh and Fraser MacIntosh.

At this point a complete rout looked possible but Kingussie steadied the ship and did not concede again until Glen got his second just before the hour and his feat was then matched by Fraser. Louis Munro's late reply could barely be called a consolation for Kingussie.

Elsewhere, Oban Camanachd all but condemned themselves to a second relegation in three seasons with a 4-1 home defeat by Lovat.

Greg Matheson scored the only goal of the first half but completed a hat trick in the second. Kevin Bartlett got Lovat's fourth while Sean Morgan scored for Camanachd at 3-0.

Lovat's 240-mile round trip to Oban hardly qualifies as a derby but the visitors' natural local rivals Glenurquhart had a free day for their annual Highland Games.

And, barring an inconceivable turnaround involving Oban winning their last two games, triple cupholders Kyles losing their last six and all with a 31-goal swing, Camanachd will be relegated.

Fort Wililam did their campaign against the drop no good with a 2-1 reverse at the hands of Lochaber and cup specialists Kyles amazingly still sit near the relegation zone following a 2-1 defeat against Inveraray at Tighnabruich.

In the league Kyles have not been looking like the holders of the Camanachd, MacAulay and Celtic Society Cups but have been struggling to raise strong teams for much of the league campaign.

And they slipped up again despite John Whyte opening. Gary MacPherson and Lewis MacNicol wrapped up the points for Inveraray in the second half.

Even though Kyles look certain to finish clear of Oban Camanachd, they are still going to have to fend off Fort William in the race against the second relegation spot, despite Fort losing their derby 2-1 to Lochaber in Spean.

Kevin Ferguson made it 1-0 Lochaber and Duncan Rodger equalised in advance of Scott Paterson's winner, which puts Lochaber back third.