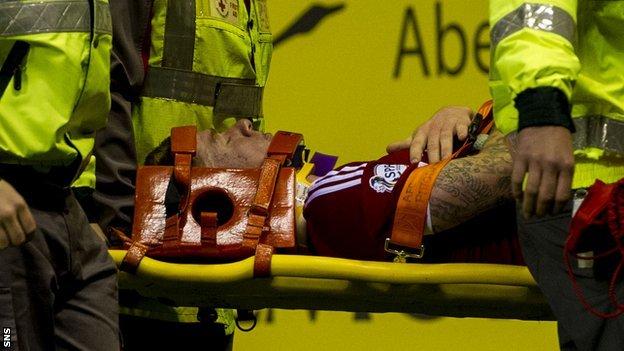 Aberdeen winger Jonny Hayes spent the night in hospital after sustaining a head knock in the Scottish League Cup tie against Alloa Athletic.

The 26-year-old was stretchered off in the second half following a clash of heads with Alloa's Daryll Meggatt.

The Dons won on penalties after the match finished 0-0 after extra-time.

Willo Flood was also substituted for the hosts and both players are considered doubts for Saturday's meeting with St Johnstone.

However, Josh Magennis is expected to recover from a shoulder knock that ruled him out of the tie against the Wasps.

"Willo's hamstring went, and with Jonny I don't think it's anything too serious but obviously it's serious enough.

"We were battered and bruised a wee bit, but we got through the tie and I'm delighted with every single one of my players."