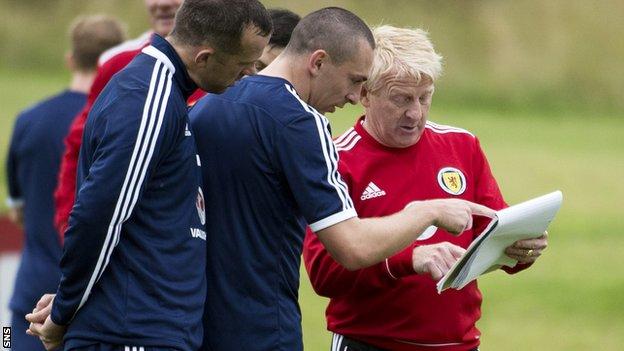 Scotland assistant manager Mark McGhee is hoping for signs of progression with the technical side of the national team's play against Belgium.

Gordon Strachan's side meet the Group A leaders in a World Cup qualifier at Hampden on Friday.

McGhee said: "We want the Tartan Army to see a certain type of performance.

McGhee stressed the need for continuity and pointed to the two most recent Scotland matches as a gauge of what kind of display is required against the Belgians.

"I think the fans can come rightly expecting to see the same type of performance. Out of that consistency will come better results."

Scotland sit fifth in Group A and can no longer qualify for the 2014 World Cup in Brazil.

Mark McGhee on Kevin Thomson: "Gordon knows him well enough to trust that not only can he come here and help us maintain the level at training, but were he to be asked, he's be able to go in and do a job - at least for part of a game."

Mark McGhee on Ikechi Anya: "He looked terrific. He's got a very good balance between not taking those unnecessary risks and keeping the ball, but when he goes forward is a great crosser of the ball and gets you up the field."

"We're playing against a team on Friday night who are absolutely on song," said McGhee.

"They've found the formula that works for them, they've got great players and great form.

"As a team they're ambitious about their qualification chances, clearly, but possibly even beyond that, reaching the latter stages of the World Cup in Brazil.

"It has to be a collective effort. We don't have any one outstanding individual that we're all going to stand back and let win the game for us. Part of our defensive strategy will be possession."

Fletcher scored for the Black Cats in a defeat to Crystal Palace on Saturday on his comeback from an ankle injury sustained in Scotland's loss to Wales in March.

"Gordon considered that and ruled it out - it was too early," McGhee added.

"If it were a lot riding on these two games, it might be different and I think Steven Fletcher himself would've been on the phone to Gordon saying he wants to come.

"But we all felt he should be given time to recover and get back to form and get scoring goals again."