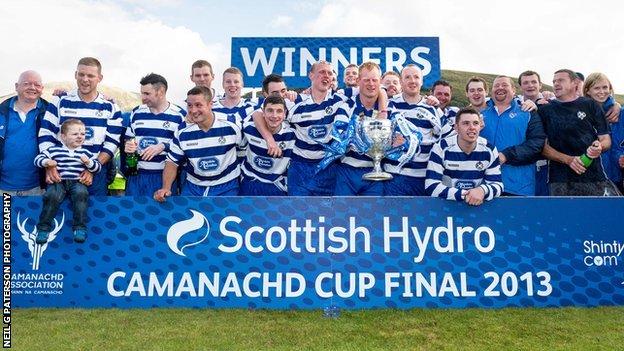 Newtonmore lifted the Camanachd Cup after

At An Aird, 4,000 supporters decked head-to-toe in a sea of blue and white, live on BBC Two, sang and chanted their way throughout shinty's aptly named "blue ribbon" event.

As the sun shone, yes believe it or not, in Fort William, it was Kyles Athletic who looked the sharper from the off and, for the opening 10 minutes, had Newtonmore on the racks.

This, however, changed on 14 minutes when, against the run of play, Newtonmore's captain, Jamie Robinson, scored with a monster hit delightfully set up by Danny MacRae - the skipper's first of the season and what a time to get it.

The balance over the space of a minute had completely shifted and More started to press time and time again, but the Kyles back four mopped up anything that broke through with great ease.

At the other end, it was Steven MacDonald who had the task of picking up Kyles top marksman, Roddy MacDonald, and was giving him very little to create chances.

The game, for me, had swung mainly because of the Newtonmore centre line, where Paul MacArthur and Robinson in particular were starting to run the show.

The second half started not unlike the first, with Kyles out the starting blocks the sharper and on a mission. However, Newtonmore once more shifted the swell in play with Glen Macintosh running through the heart of the Kyles defence and slipping in his side's second goal to effectively kill the game.

MacRae then added to his goal tally of 35 with an 80th-minute rocket to wrap up the 106th Camanachd Cup final and take Newtonmore's tally of tournament wins to the 30 mark.

There were a few candidates for the Albert Smith Man of the Match Award, but it was More captain Robinson who was deservedly presented with the medal before raising the cup high above his head, much to the delight of one half of Badenoch.

Jamie is the second player ever to score a goal, collect the Albert Smith and captain the winning the side in the same day. The other is an accordion-playing shinty fella from Spean Bridge.

Another one for the shinty pub quiz is that Newtonmore incredibly did not lose a single goal throughout their 2013 Camanachd run this year. This has only ever been done once before. Does anyone know who by and what year? A wee clue is the club doesn't exist anymore.

Newtonmore's manager, PJ MacIntosh, calmly spoke after the match about how the night would go, exclaiming, "It will just be another normal night in the Balavil Hotel," with a grin that screamed a three-day party was just about to kick off.

Kyles will be bitterly disappointed at losing the final, but unfortunately for them they just didn't seem to get their hitting or tactics right on the day. Another blow for the club was the announcement of goalkeeper Kenny MacDonald's retirement after the game.

Kenny has been an absolute legend within the sport and appeared in his first Camanachd Cup final 30 years earlier in 1983! He had to wait a further 11 years, however, before he got his hands on the cup after a 3-1 win over Fort William at Inverness.

Rumour has it that, over 30-plus years, Kenny has missed less than 10 games for his club and broken more hearts than John Travolta with his cat-like reactions.

Interestingly, his son, Innes, is tipped for his father's position to replace the most recognisable goalkeeper within our sport.

An absolute gentleman and I'd like to wish Kenny the best of luck with his retirement, but I won't be sorry to see "the human wall" not between the posts at Tighnabruaich anymore.

Looking ahead to this weekend's Premiership, Fort William welcome Scottish champions Newtonmore to An Aird. Fort must take points from this match if they are to keep their league hopes alive.

I'd like to suggest Newtonmore send down their second team this weekend and let the first team relax and enjoy last weekend's success. I fear this request may fall on deaf ears!