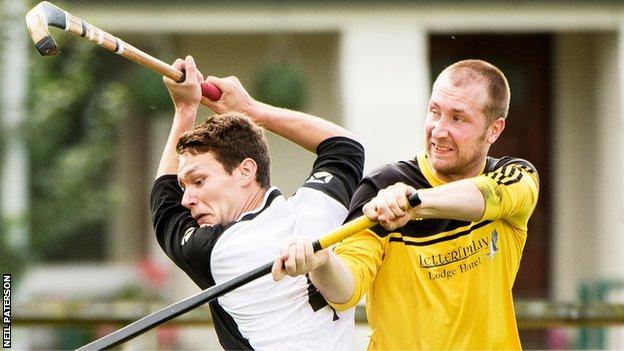 Well, it's confirmed: Fort William have been relegated from the Premiership!

If you have been reading my articles over the past few months, or you're involved in shinty, this will come as no surprise to you.

However, as I woke on Saturday morning, on the other end of the world in a panic to check the results, the inevitable confirmation still had me feeling sick as a dog.

I've found it extremely difficult to watch from afar, being away on tour with the band for the past three months, and unavailable to help Fort William in their most challenging period in recent memory.

But for the youngsters who have been turning up week in, week out and getting hit hard with huge results, it's been much more difficult.

Fort's demise comes down to a majority number of players retiring at the same time and the remainder of the older experienced players never all being available on the same weekend due to work commitments.

This is an increasingly common complaint of clubs in today's world.

It's quite remarkable to think that only three years ago the Camanachd Cup was sitting in the An Aird cabinet and now the new National Division 1 is calling for the Fort William team.

It's certainly not all doom and gloom, though, with so many young fresh faces coming through the ranks eager to prove themselves and keen to help build a new Fort force, if they can all stay and train together.

Training has been another aspect that has been testing, as many of the experienced players live away from the town and are not managing to train with the emerging talent.

That's not ideal for managers Adam Robertson and Victor Smith to help gel their squad together, nor get consistency at training, when they are only seeing a number of travelling players on a Saturday morning before the match.

National Division 1 will certainly not be easy, but it won't be as fast or hard-hitting as the Premiership, which will give the up-and-coming youngsters the opportunity to play senior shinty without the harsh reality checks that the majority of Premiership clubs have imposed on Fort this year.

Fort William finished their last remaining fixture of the Orion Group Premiership against second place Lovat and managed a point with no fewer than eight teenagers starting at Kiltarlity.

Meanwhile in Badenoch, another Newtonmore v Kyles epic battle was taking place, with Kyles the victors on this occasion coming back from 4-2 to win a 5-4 thriller.

As the season slowly draws to an end, the only Premiership fixture this weekend has Kingussie finishing off their 2013 season with an away day to Tighnabruaich.

An away tie to play Kyles Athletic is one of the best ways to finish your season, as the bus will be loaded to the gunnels with, em, fizzy sports drinks, for the return four-hour journey - and that's without stops!

I'd suggest the local shop in Kingussie orders in a hefty doze of pain killers now for Sunday morning.