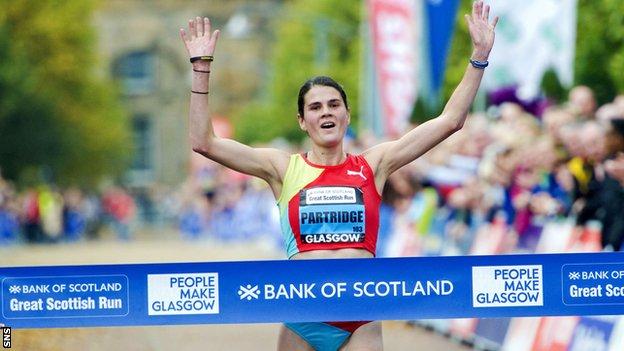 Great Scottish Run winner Susan Partridge is on a shortlist of six for Scotland's Athlete of the Year award.

The 33-year-old from Oban was first in Sunday's half marathon in Glasgow and finished 10th in the marathon at the World Championships.

Chris O'Hare is the only male candidate after reaching the World Championships 1500m final in Moscow.

The winner, chosen by a selection panel, will be announced on 26 October.

"I think the Scottish Athlete of the Year short-list proves we've some people who can rightfully label themselves as world class,' said Stephen Maguire, director of coaching for scottishathletics.

"If you look through it there are five who went to the World Champs with Team GB and NI as well as Libby Clegg who did well in the IPC World Champs.

"Eilidh Child and Eilish McColgan have been setting Scottish records through 2013 and there are probably three on that list of six who you could say come under the heading of 'potential'. The others are nearing or at their peak."

Child reached the 400m hurdles final in Moscow, finishing fifth, before collecting a bronze medal in the 4x400m relay.

The 26-year-old from Perth was part of the winning 4x400m relay team at the European Athletics Indoor Championships, having finished runner-up in the individual event.

And she won the 400m hurdles at the European Team Championships in Gateshead.

Steeplechaser McColgan reached the final in Moscow, while Muir was a surprise finalist in the 800m.

European 800m champion Lynsey Sharp collected the award in 2011 and 2012 but a knee injury has ruined her season.