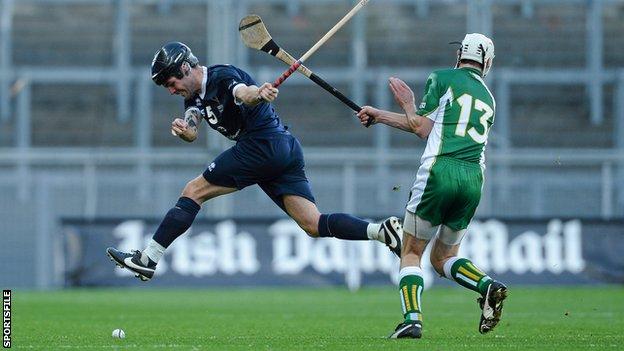 Despite a brave second half performance, Scotland went down by 24 points to 18 in the opening shinty hurling international against Ireland at Dublin's Croke Park.

An early blitz saw the home side six points clear after just five minutes and thereafter the margin between the teams did not vary much in the game of composite rules.

Most of Scotland's points were scored from hits over the bar but there were first half goals from Liam MacDonald and Finlay MacRae.

The teams meet again at Bught Park Inverness on 2 November, with the aggregate score deciding the destiny of the Marine Harvest Quaich.

The score is rounded down to 3-1 to Ireland since a win constitutes two points and both teams get a bonus point for scoring two or more goals.

Ireland got off to a dream start with early goals worth three points each from Cahir Healy and Graeme Mulcahy.

Kilmallie's Liam MacDonald struck back for Scotland with 12 minutes on the clock with a second goal from Finlay MacRae of Kinlochshiel. Kevin Bartlett (Lovat) contributed a two point hit over the bar with a single also from Macdonald to bring Scotland's half time tally to nine points.

However Ireland, responded with goals from Neil MacManus and Paul Divilly which, along with five other points lifted their half way score to 17.

Following six first half goals, the second half produced no more but Scotland scored nine over the bar to Ireland's seven to narrow the final margin to just six points.

Scotland's second half tally amounted to further two pointers from Bartlett and MacRae and also from Lochaber's Sean Nicholson while Shiel's John MacRae along with Newtonmore duo Glen MacKintosh and Steven MacDonald all got single points.

"Scotland manager Drew McNeil said: "I'm positive - not about the result but we created loads of chances although then conceded a couple of soft goals, maybe more than a couple.

"We're still in the game, but more importantly we played very well. What we intended to do was to show our shinty skills and the managers of the Irish team told us they were impressed by our skills.

"It's always good to have somebody from another sport appreciate our sport."

The domestic shinty season appears reluctant to finish, with the very last Orion Premiership game between Kyles and Kingussie postponed for a second time due to an unplayable pitch at Tighnabruich, with no alternative venue available.

Both teams just need a point to overhaul fourth-placed Lochaber.