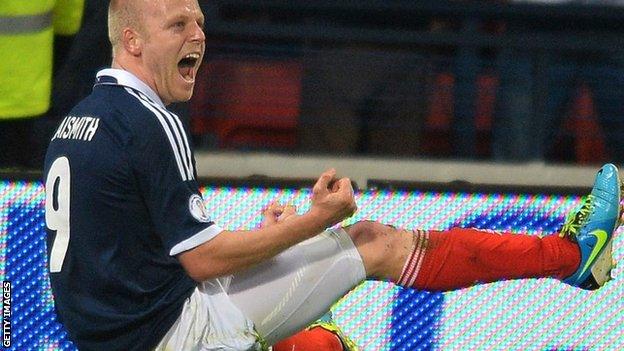 Scotland must do well in friendlies against USA and Norway to maintain confidence ahead of the campaign to reach Euro 2016, says Steven Naismith.

Three wins from their last four games has heartened the Everton forward but Scotland will once again be absent when the World Cup kicks off next summer.

"We have to keep this momentum going with good results," said Naismith.

"We have two tough games coming up and we need to be on song. There is always something to play for."

Everybody is dying to get to these tournaments, they're the best in the world when you see them

France will host the European Championship from 10 June to 10 July 2016, with the finals format being extended to 24 teams from 16.

Qualifying will run from September 2014 to November 2015.

"There is a bit of a wait and that is the disappointing thing for the squad and the manager," added Naismith, 27.

"The results we have had have been brilliant. We have moved on a long way but the real test will be when the Euros start and we have to be ready for that."

Scotland have not been at a major tournament for 15 years and Naismith believes manager Gordon Strachan is the man to end that barren run.

"He's made it clear that he wants everybody to work hard, and it's shown," he said of the former Celtic and Middlesbrough boss.

"That's what the players have got to be driven by - a place in his squad coming into the Euros and the big games.

"You look at a lot of players - guys like Barry Ferguson, for a guy of his quality not to get to a major tournament is very disappointing. Even Darren Fletcher is another one with a lot of experience who has never made one.

"Everybody is dying to get to these tournaments, they're the best in the world when you see them.

"Unfortunately, we won't get to go to Brazil for a World Cup, but we move on and there's a real belief.

"It's important, because the squad is getting to the mid-to-late 20s stage. You've got to be hitting your peak at some point."