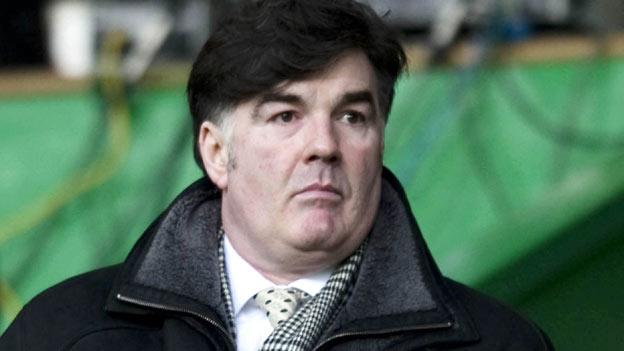 "Mr Fixit" describes himself as an educator, a psychologist, a friend and a shoulder to cry on.

His phone rings for the umpteenth time that day and he asks his children to keep the noise down in the back of the car so he can take the call.

Football agent Raymond Sparkes has been in the business since 1991 and, during the transfer window, his family know he'll be busier than usual.

"I'm on the phone the entire day, every day. Does it impinge on family life? Of course it does. But it's all important in the food chain of what I'm trying to achieve."

Sparkes and another agent run ProStar Management in Glasgow: "The longest serving agency in the country," beams Sparkes.

"I predominantly look after managers and a number of young players. Most of the older players are handled by the other agent. We probably run about 40 clients in total and that's more than enough. It keeps the phone ringing regularly."

The man who has negotiated with the great and the good of British football says most managers in Scotland are "curtailed by the purse strings" and will, no doubt, be restricted to loan deals.

While the hollering Jim White is peeled from the ceiling in the Sky Sports studio on deadline day, the battalion of agents continue to work relentlessly in the background.

So how would Sparkes describe a typical day in January? "It breaks itself down," he says.

"As most agents will tell you, trying to find managers between 9:30am and 2:30pm is extremely difficult because that's the busiest part of their working day.

"After that, they'll call us expecting to get some information on players or expect a call from us. You either catch managers at 8am - which is a regular feature for me - or you wait until 3pm; sometimes it takes until 10pm that night before you can pin them down.

"That question is usually: 'What are you looking for?' and/or 'this is what I have to offer you/I hear you're looking for a player in that position'. Generally, you try to be Mr Fixit and bring people together."

While Manchester United are splashing out £37m on Chelsea's Juan Mata, it is a different economic climate in Scotland, with clubs waiting for a cash transfer to enable them to bolster their squad.

Sparkes thinks that Scottish managers almost rely on a "degree of charity" from bigger clubs to lend them better players.

Sparkes bristles at the suggestion that agents are generally the villains of the piece, intent on unsettling star players in an effort to trigger a move.

"Forgive me for sniggering, but for those people who believe that agents get their money for doing very little then perhaps they should spend a couple of days with me to see what I have to do in order to get a deal over the line."

"It's a job that demands privacy and confidentiality," he says. "Dispensing advice and talking to people; you've got the solution and yet you've got no-one to really bounce that off.

"That does leave you feeling rather isolated. I've been fighting for a very long time to dissuade the general public of the notion that we are the bad guys.

"There are times when I have to offer some cruel love in respect of telling people what the problem is and the part they can play to rectify it."

Sparkes believes the biggest difference between young players now and those he advised in the 90s is the insatiable appetite for wealth.

"At 54, I've been round the block a few times. The truth is we seem to have a generation of young people who want all the trappings of success before they've finished their apprenticeship.

"Had Wayne Rooney not gone to Manchester United, where someone like Sir Alex Ferguson was in charge, then there was every chance the striker would've gone off the rails. Wayne has a lot to thank Sir Alex for for moulding his career."

Sparkes praises the efforts of Everton boss Roberto Martinez in waxing lyrical about Scottish players. "His chief scout, Kevin Reeves, has a keen eye and he goes back to a manager who has a measured approach; Martinez is the Jose Mourinho of the future."

The agent has never been held up by the lapels by an irate chairman but admits a strained relationship with then Celtic chief executive Fergus McCann over John Collins' move to Monaco.

Away from the phone, Sparkes lets off steam with a few rounds of golf and watching his 12-year-old son play football.

"If I'm playing golf and there's an accountant, a lawyer and a builder in our group, there tends to be a million questions for me as the football agent. Everyone finds my job fascinating and you have to get used to being the centre of attention, rolling out the same anecdotes and stories to keep them entertained."

Does that cause problems when addressing a four-foot putt to save par? "That problem doesn't really affect my golf game!"

Sparkes believes a cash injection from English clubs would give Scottish football a much-needed boost; and he is looking forward to getting back to some kind of normality with his family when the transfer window closes.

"I'll be able to have a conversation, not a ratty one."

And Mr Fixit isn't entertaining talk of his own retirement either.

"As long as people are willing to listen to me and I enjoy the stimulation of speaking to managers then I've still got plenty of gas left in the tank for a few years yet."