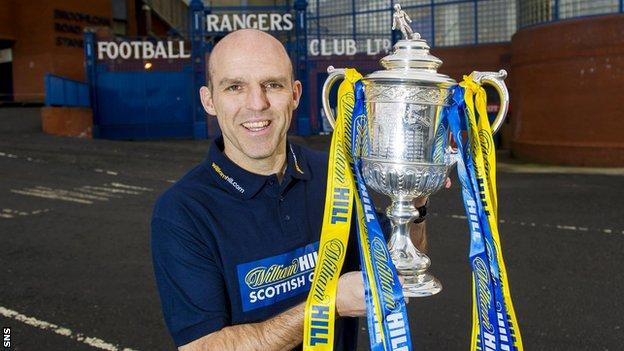 Former Rangers player Alex Rae says it is "dire, desperate and not acceptable" that so much money has been taken out of the Ibrox club.

However, Rae feels the current chief executive, Graham Wallace, is on the right track by cutting costs.

Rangers reported a £14m operating loss for the 13 months to June after £22m was raised in a share issue in late 2012.

"I'm a fan first and foremost and it's been terrible to watch it," said Rae.

"It's been dire, really desperate when you look at some of the monies that have gone out the door," said the former midfielder.

"It's been one thing after another, there's been money going out the door hand over fist and it's not been acceptable. The fans deserve better.

"They've had to put up with a couple of really, really tough years and all they want is some sort of direction. Mr Wallace has come in and he seems to be doing that.

"He hasn't made any knee-jerk reactions, there's nothing being leaked to the press and there seems to be a plan in place.

"If there's a plan in place I think the manager will buy into that. Hand-in-hand, it's paramount you work with the board going forward.

"The board were working their own agenda in the last year or so and that doesn't benefit anyone. Everybody has to be in sync."

"I think some of the fans are looking to try and get a cup run," added Rae, who won the Scottish Premier League and League Cup with Rangers in 2005.

"I saw Dunfermline play Rangers recently and it was only latterly that Rangers managed to get the win.

"I'm sure they'll come with a lot of confidence but I would expect Rangers to go through in that one.

"They've walked through their league and it's only a matter of time before they get over the line.

"This is obviously the next stage, to try to get a cup run and hopefully get to a final for the Rangers fans."