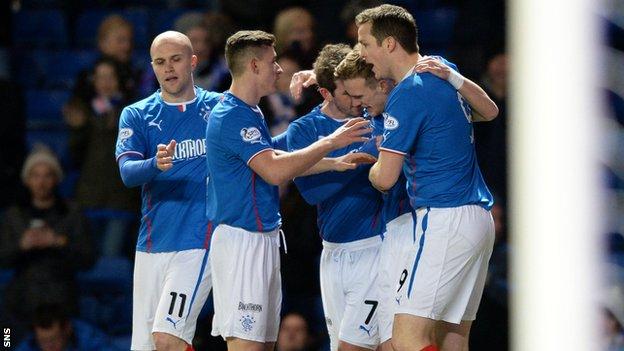 Ally McCoist is still unsure of Rangers' Scottish Cup credentials but feels replicating the display against Dunfermline would boost their chances.

in the opening fifth-round tie of the weekend, with Dean Shiels netting three of the goals.

"Can we beat anyone left in this competition? I don't know, I really don't know," he pondered.

"I have no preference for the draw for the next round other than a home tie."

Shiels scored twice before David Templeton fired Rangers' third before half-time. Another from Shiels followed in the opening minutes of the second half.

"I would be happy if we could replicate that type of performance in the next round against anybody," enthused McCoist.

"I thought for the majority of the game we were really good .

"That level of performance I would be happy with playing anyone. I'm not going to say we would beat anybody because one or two teams - and obviously Celtic - would be favourites.

"There are a lot of good teams left in the competition but if we put in a performance like that then I would be happy to take my chances against most teams - but that is not to say we would win."

The match ended on a somewhat sour note with Templeton booked following an altercation with Alex Whittle and Rangers defender Bilel Mohsni was fortunate to escape punishment after appearing to kick out at an opponent as he made a clearance.

And Pars boss Jim Jefferies reflected:"The last two times we played them, Rangers were complaining about us being physical. But we never laid a finger on them tonight.

"If they didn't like what we gave them last time, we should have given them more of it and then we might have had a better chance.

"When you don't compete against a side like that it makes it very tough."