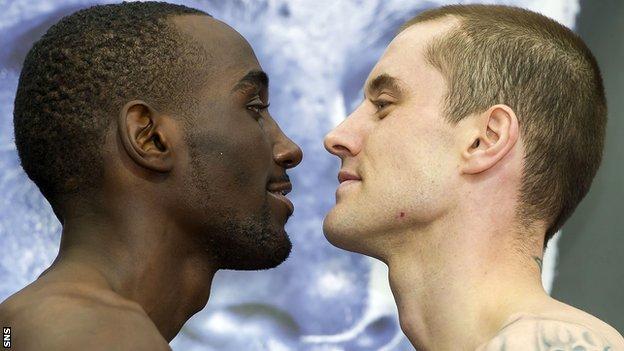 The former world champion says Lanarkshire's Burns can be the first to beat the American, and says it would rank as one of the great British wins.

"If he wins, it will be one of the best wins in a British ring for some time," Hatton said.

"This is Ricky's chance for his name to go seriously up in lights."

He's a wonderful success story, getting a world title, and he's not just got to the world title, he's fighting the best in the division

Burns will be defending his WBO world lightweight title for the fifth time when the two clash at the Glasgow SECC on Saturday night, with many expecting Crawford to provide the toughest test of his career.

Hatton, who defeated the great Kostya Tszyu in 2005 to capture the IBF light-welterweight crown, compared Saturday's fight to his own memorable win in his home city of Manchester that night.

"It's a credit to Ricky that he's taken this fight on," said Hatton, now a boxing promoter.

"Crawford is probably one of the most dangerous fighters in the division and that just sums Ricky Burns up.

"He's a wonderful success story, getting a world title, and he's not just got to the world title, he's fighting the best in the division.

"If he can pull it off, this will be a fight he'll be remembered for when he hangs his gloves up in years to come."

Crawford boasts a record of 22 wins - 16 by way of knockout - with no defeats.

Burns will have the support of 10,000 fans and, as a man who enjoyed many fights in front of a passionate home support, Hatton thinks the Scottish crowd can roar him on to victory.

"It will be like the extra man for him when the fight is getting hard," Hatton said.

"When that crowd roars he needs to use it to his strength, not play to the crowd, not get involved in a war.

"He (Crawford) will never have boxed in this type of atmosphere. The Scottish fans are always very, very passionate. He might not travel well this kid, so right from the off get in amongst him, put him under pressure and let's see what he's made of. Maybe Ricky can pull away with a points win."

Burns clung on to his world title after a controversial draw in his previous bout against Raymundo Beltran back in September, when he suffered a broken jaw. Hatton concedes that the injury will be on Burns' mind but that he wouldn't have taken the fight if he was not physically ready.

"I have no doubt it will be playing on his mind, but Ricky and his coach wouldn't have accepted the fight if they didn't think the jaw was going to stand up," said

"Ricky's been in the game a long time now, as has his trainer Billy Nelson - they're not daft. It will be in the back of his mind, but he's experienced enough to know what he's doing."

You can hear more from Ricky Hatton on Sport Nation at 1100 this Saturday morning on BBC Radio Scotland 92-95FM, on digital and online.