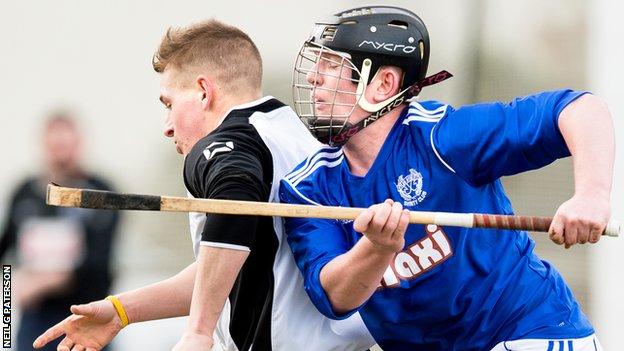 After a year of controversy and often heated debate, shinty's new league structure, topped by an eight-team Premiership and National Division, finally got under way with top flight home wins for Lovat and Glenurquhart.

Two games in each of the top two leagues were off due to bereavement or waterlogging, including champions Newtonmore's home fixture against Lochaber.

In the Orion Premiership clash at Kiltarlity between Lovat and Kyles who are two of the more likely candidates to challenge Newtonmore, Lovat's Owen Ferguson got the top division's first goal of the season after 18 minutes.

Into the second half Kyles, with an increasingly irate manager James Perlich deploying two full forwards, went flat out for an equaliser after Lovat had missed chances to increase their advantage. Then Greg Matheson made it 2-0 to Lovat with 20 seconds remaining.

It was almost half time before Glenurquhart broke the deadlock at home to Kinlochshiel in an encounter between two sides under new management. James MacPherson's opener was followed early in the second half by Lewis MacLennan before MacPherson completed his double and Neale Reid made the final score 4-0.

In the second tier National Division, restored under the new league format, Craig Anderson opened for Glasgow Mid Argyll at Beauly. But a David MacLean double and one from Ross Forbes all within eight minutes made it 3-1 for the home side.

Similarly, Blair Morrison put Caberfeidh ahead early at home to Oban Camanachd but Andrew McCuish equalised and then grabbed a penultimate minute winner to make it 2-1 for Camanachd.

The realigned area leagues now bring together the reserve sides of the bigger clubs and some of the lesser first teams.

So there will be alarm bells ringing in Inverness when their top team lost 6-1 at home to Newtonmore's second string in North Division 1. Strathglass have been struggling in recent years but routed neighbours Lovat's reserves 8-1 which included two from 50 year old Robert Geddes. Similarly Skye, who just missed a place in the National league, swept Beauly's reserves aside 6-0 in Portree.