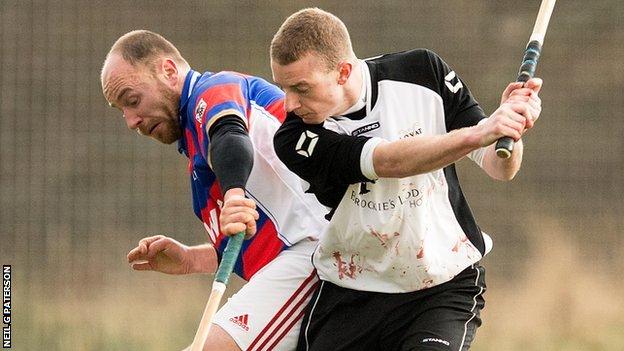 Orion Premiership champions Newtonmore got their quest for five titles in a row off to a belated start with a 5-1 win over old rivals Kyles at the Eilan.

But Lovat go top of the table with a maximum four points from their two games following a 3-1 success at Kingussie.

The second Saturday of the new season saw only eight games go ahead from 26 scheduled as the weather intervened even more harshly than a week previously.

Newtonmore were 3-0 up within half an hour with goals from Evan Menzies, Danny MacRae and Glen MacKintosh.

Menzies and MacRae then completed doubles in the second half to make it 5-0 before Robbie MacLeod pulled one back for Kyles in this clash between last season's Camanachd Cup finalists.

Meanwhile, just three miles along the road at The Dell, Lovat were building up a virtually identical 3-0 lead over Kingussie with Greg Matheson, Ryan Ferguson and Graeme MacMillan all on target within 26 minutes.

Lee Bain got a consolation for Kingussie early in the second half of a game where Lovat had briefly to survive the loss of Lorne MacKay to a late red card.

Only two Premiership teams have played both their scheduled games - Lovat, who top the table, and Kyles, who are bottom without a point - while Inveraray and Lochaber have not played at all.

The only match to survive in the Marine Harvest National Division was the all-North clash where Beauly travelled to Kilmallie.

Michael Rodger and Mark Graham in the first half and Martin Munro in the second put Kilmallie 3-0 up before David MacLean got one back for Beauly.

But within two minutes Liam MacDonald restored the three-goal cushion and late on Graham completed his double to make the final score 5-1.

In North Division 1 a Badenoch derby between the reserve teams of Newtonmore and Kingussie at Dunbarry ended 8-1 for More for whom Calum Stewart scored five.

The corresponding encounter between Glenurquhart and Beauly ended 5-0 for the Glen second team while Inverness's first team handed Lovat's reserves their second heavy defeat in a week, with a 6-1 scoreline at Balgate.