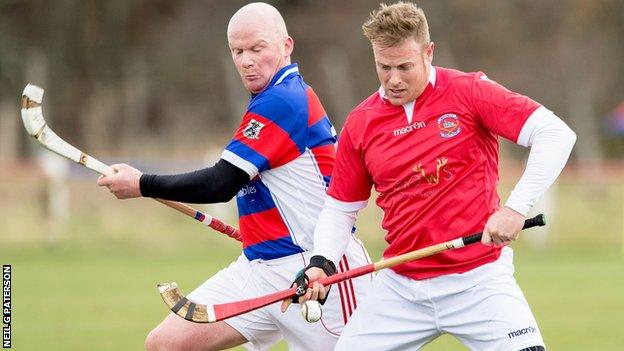 Unplayable pitches again hit the shinty programme hard, with 14 out of 25 fixtures postponed.

However, the top two in the Orion Premiership both played, and both won by two-goal margins. Leaders Lovat beat Inveraray 2-0 at Kiltarlity while Newtonmore came from behind for a 3-1 home win over Kinlochshiel.

Kingussie stayed in touch with a 1-0 success over visitors Glenurquhart.

Kevin Bartlett opened after just four minutes for Lovat and then completed his double after 79 to ensure maximum points for last season's runners-up and the current leaders after four games.

Champions Newtonmore have only played three, but also have a 100% record after their victory over Kinlochshiel who opened the scoring in the first half through Duncan Ach MacRae. That was how it stayed until almost the hour mark when Glen MacKintosh equalised.

It must have been a nervous afternoon for the home support since it was not until the last five minutes that Craig Ritchie and Calum Stewart secured both points for Newtonmore.

Three miles away at The Dell, Savio Genini's 55th-minute goal for Kingussie was all that separated the home side and Glenurquhart. Kingussie now leapfrog their opponents into third place.

The new Marine Harvest National Division has suffered badly with 10 of the 16 games scheduled so far postponed.

This means that, four weeks into the season, neither Bute nor Fort William have played at all. There has been at least some good news for Bute after their failure to raise sides last Saturday. An emergency meeting confirmed that the club will continue to field two teams.

The only National Division game that survived was switched to Yoker where Oban Camanachd beat Glasgow Mid Argyll 3-2. Ian MacMillan scored early for Camanachd before a Mark Bain double put Mid Argyll into the lead. However, Iain Campbell and Daniel Cameron put it Camanachd's way in the second half.

A Conor Jones hat trick secured a 3-1 away win for Newtonmore's reserves over their counterparts from Beauly in North Division 1. In the same league, Kingussie's second team fought out a 4-4 draw with the Inverness top side. It was 4-3 Kingussie at half time before Liam Girvan completed the scoring with 37 minutes still remaining.