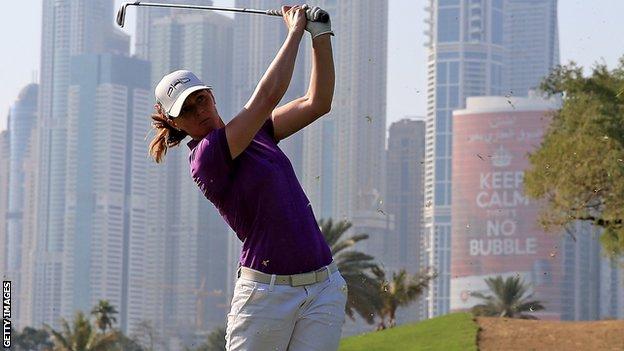 Scotland's Vikki Laing saw her Turkish Open challenge fade with a three-over-par final round of 76 in Antalya.

Laing, from Musselburgh, had been one shot off the lead overnight but ended up joint fourth on three under par.

France's Valentine Derrey went on to claim her first win on the Ladies European Tour with a two-shot victory.

Derrey's final-round 70 saw her win on seven under, with Denmark's Malene Jorgensen (73) second and England's Charley Hull (72) third on four under.

Hull had been well in contention after birdies on the 14th and 15th but a bogey on the 16th derailed her challenge.

Derrey, who carded four birdies and one bogey, said: "I was very happy with myself. I played decent golf and just played my own game, made some birdies and it worked out finally.

"I learnt how to stay patient and play my own golf because you can't control what others do."

Czech teenager Klara Spilkova was top of the leaderboard ahead of the final round and was briefly four clear after birdies on the second and third, but ended up in sixth after a round of 78.