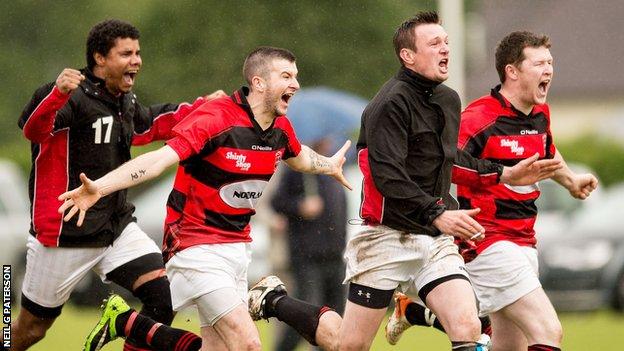 There was high drama at Drumnadrochit in the RBS MacTavish Cup semi-finals where 2013 runners-up Glenurquhart went through on penalties in an absolute cliffhanger against Newtonmore.

The other semi-final at Balmacara between Kinlochshiel and holders Lovat was abandoned in heavy rain, as was the National Division match between Kilmallie and Caberfeidh.

The final of the AJG Parcels Celtic Society Cup in the south will be a repeat of last year's between holders Kyles and Inveraray while Kingussie beat Lochaber 5-0 in the day's only Premiership match.

In Drumnadrochit, Calum Stewart put Newtonmore ahead just after the hour and David Smart equalised with 10 minutes left.

In the third minute of stoppage time Glen got a penalty and their regular penalty taker, goalkeeper Stuart MacKintosh, had his effort saved by opposite number Mike Ritchie. Neale Reid netted the rebound but that was ruled offside

Extra-time yielded no more scoring and Glenurquhart then won a lengthy sudden death shootout 2-1 to reach a second consecutive final.

In the Celtic Society Cup, Roberto Zavaroni's double and a goal from Thomas Whyte gave Kyles a 3-0 victory away to Glasgow Mid Argyll while two from Neil Campbell put Inveraray through 2-1 at home to Oban Camanachd, who had Iain MacMillan on target.

The Premiership's sole fixture saw Kingussie eclipse bottom side Lochaber 5-0 at the Dell to consolidate their third place. Fraser Munro and Lee Bain got two each with one more from Savio Genini.

In the National Division's only game, a Jack MacDonald hat-trick laid the foundations of Beauly's 5-0 away win over Glenorchy with the others coming from Calum Morrison and David MacLean as Beauly go second.

It was also a good day for Glenurquhart's second team whose Aberdein Considine Sutherland Cup tie preceded the MacTavish game and their reserves beat Col Glen 6-0.

The other Sutherland tie produced a penalty shootout where Oban Camanachd's reserves Lochside Rovers went through against the Bute second team. It has been a luckless season so far for the island side and Bute's first team went out of the South of Scotland Plate, also on penalties, at Aberdour.

In the MacTavish Plate, one of no fewer than 13 different competitions played on the same day, Skye beat Inverness 3-1.