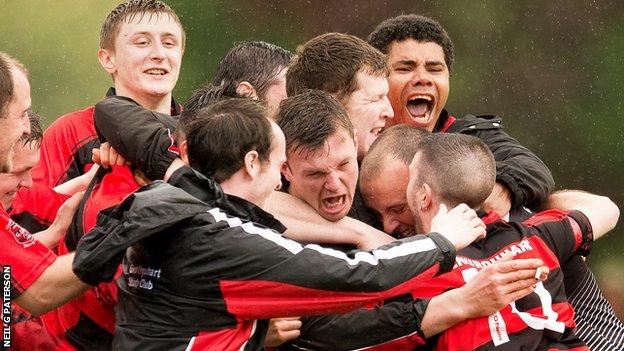 Glenurquhart romped into the RBS MacTavish Cup final after a dramatic penalty shootout against Newtonmore at Drumnadrochit.

It took sudden death and 14 penalties to separate the two teams, after the match finished 1-1, however goalkeeper Stuart Mackintosh, had his chance to become the hero on the 89th minute with a penalty, which was saved my 'More's Michael Ritchie.

With no further goals and the score dead-locked after five penalties each, it was musician Mackintosh to step up and hit his third and final, sudden death penalty of the day, to waltz Glenurquhart through to the final.

Glen will have to wait a further week to find out who they meet at Bught Park after the other MacTavish semi-final, Kinlochshiel v Lovat, was abandoned due to adverse weather.

In the South, Inveraray once more meet Kyles Athletic in the AJG Parcels Celtic Society Cup final at Glasgow's, Old Anniesland on 28 June.

The islanders beat Inverness 3-1 to secure their spot at Bught Park, while Fort William were gifted their final day out, after Boleskine forfeited the game to Fort before a ball was even struck.

This fixture was always going to be difficult for the Farr club, as they lost at home to Fort William's reserves last month, and this time they had to travel to An Aird to face Fort's first team.

The new Plate competition, north and south, has already racked up some huge scores with mismatch draws.

However, as I wrote a number of weeks ago, hopefully the Camanachd Association will revise the competition after this first year and come up with a solution. Teams would rather get through a semi-final than turn up and potentially get beaten by a cricket score.

A week past Saturday, we saw newly-appointed Scotland boss, Kingussie and shinty legend, Ronald Ross, or better known in media circles as 'Ronaldo of the Glens' make un unscheduled return to Kingussie's first team due to a player's stag party taking most of the first team away.

It took shinty's most prolific goal scorer, with over 1,000 goals to his name, only two minutes to find the net, shortly followed by a second goal on the nine-minute mark to add to his already untouchable tally.

I hope for shinty's sake, this was not just a flash in the pan for the big number 10 and we see him back on the Kings sawdust as often as possible.

Recently there was even a song written for Ronald by Keith Meisner.

Keith was one of Andy Murray's sparring partners growing up and decided to leave tennis behind to follow a path in music instead. Ronald had also helped Keith and Andy Murray in their early years as a coach at the national tennis camp and was also crowned North of Scotland tennis champion.