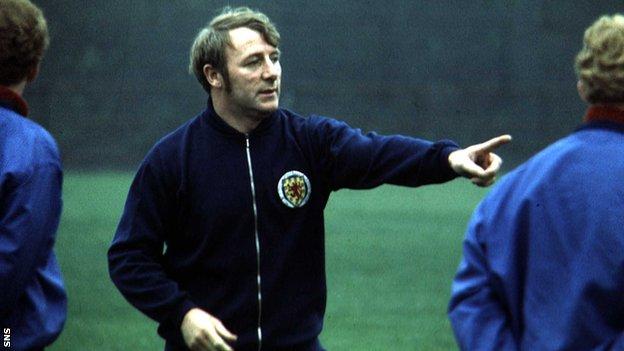 Tommy Docherty admits that he regrets his decision to leave the Scotland job to become manager of Manchester United.

He was approached by Matt Busby to succeed Frank O'Farrell in December 1972 while Scotland were on course to qualify for the 1974 World Cup finals.

Docherty spent five years at Old Trafford, and won the FA Cup, but believes that he made the wrong choice.

"That was the biggest mistake I made," he told BBC Scotland. "It was partly greed and partly stupidity."

Reflecting on his time as Scotland manager for BBC Radio Scotland's "Managing Scotland" series, Docherty believes that he was in charge of the most talented squad the national team has ever been able to call upon.

Players such as Kenny Dalglish, Jimmy Johnstone, Lou Macari and Billy Bremner all featured under him.

Yet, when Busby asked him in the boardroom of Selhurst Park if he would be interested in the Manchester United job following the team's 5-1 defeat by Crystal Palace, Docherty told him he would be.

"I was stupid," he said. "I should have stayed with Scotland. [It was] partly the money, I have to be honest about that.

"I should never have gone to Manchester United, I should have seen my job out with Scotland at the World Cup and then, if Man United were still interested, I could have gone then. But I was concerned I might miss the chance.

"I think we would have done great [at the World Cup]. I was getting a bit too strong at the SFA and I don't think they liked that either. I had a contract with Scotland and they could have held out and said to Man United, 'we want some compensation'. But that wasn't asked for. I think they were quite glad to get rid of me."

Docherty's spell at Old Trafford saw George Best fail to revive his United career, the retirement of Bobby Charlton and the departure of Denis Law. There was relegation and promotion, as well as the 1977 FA Cup final victory over Liverpool.

It ended when Docherty's affair with the wife of club physio Lawrie Brown became public. Docherty continued on an itinerant career and eventually married Mary Brown, with the couple still together now.

He is renowned for being an opinionated figure in football, as well as a talented after-dinner speaker.

Despite both coming from working-class backgrounds in Glasgow, Docherty and another former Manchester United manager, Sir Alex Ferguson, have never been close.

"Fergie is the greatest manager ever," Docherty said. "I admire the man as a manager and what he's done for Aberdeen and at Man United.

"[But] I couldn't honestly say I know Fergie at all. He doesn't agree with anything I do, obviously, and I don't blame him for that.

"I don't agree with a lot of things he does. Personally, I think he's a bit of a bully. [But] I wouldn't be ill-mannered to him if I saw him."

Docherty, who is 86, seldom attends matches now, although he is regularly invited to Stamford Bridge, having spent a successful six-year spell as Chelsea manager.

One disagreement with Manchester United over a ticket request has soured his relationship with the club and exacerbated Docherty's view that the modern game is different from the one that he knew. He also believes there remains a lingering issue about the way he left Old Trafford.

"And they invoiced me for £88. [Man United] charged me for it. It seems to be at Man United [how I left] still hangs over me.

"I wouldn't cross the road now to watch Man United, because of two tickets. What's that to them? I don't go to many games now, because of situations like that."