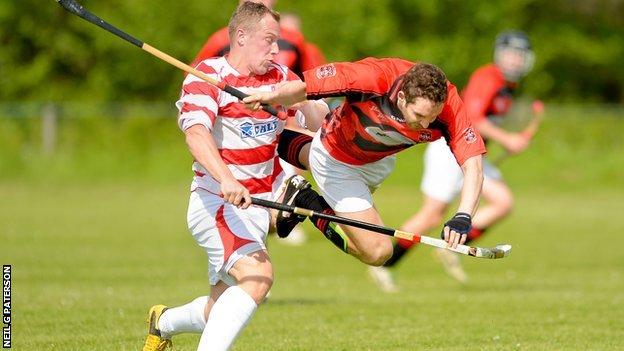 A last-minute goal from Colin MacDonald at Tighnabruaich put Kyles through to the last eight of the Scottish Hydro Camanachd Cup with a 2-1 victory over holders Newtonmore.

It was a particularly satisfying result for them, given Newtonmore

In the other all-Premiership tie at Spean Bridge, Glenurquhart had a 5-3 away win over Lochaber.

North Division 1 side Skye made a 500-mile round trip by road and water for a 3-0 victory over Bute from the league above them.

In the Orion Premiership, Lovat failed to draw level with Newtonmore at the top when they could only draw 3-3 at Inveraray.

It took 65 minutes for Roberto Zavaroni to open the scoring for Kyles, but More's Steven MacDonald then equalised. And just when it looked as if the tie was going to a replay, MacDonald fired in his dramatic clincher for the 2012 Cup winners.

The other Premiership side to bow out was bottom team Lochaber on a 5-3 scoreline against visitors Glenurquhart. James MacPherson scored on either side of half time for Glen, who also had David Smart, Fraser Heath and Neale Reid on the scoresheet.

Skye broke their marathon journey with an overnight stay near Glasgow before taking the ferry to Rothesay for a straightforward 3-0 defeat of Bute.

Shockie MacLennan opened after just seven minutes and it was 2-0 before the half hour thanks to Kenny Campbell. MacLennan then wrapped the tie up in the second half.

A Jordan Fraser penalty for Kinlochshiel well into the second half was all that separated the Premiership side from hosts Beauly from the National Division in their tie at Braeview.

There was a 7-3 home success for Fort William over Caberfeidh. The Fort were cup winners five times between 2005 and 2010 but have recently fallen on harder times in the lower leagues.

However, it was Cabers who went ahead in the first minute from a Lewis Smith own goal but Fort came roaring back with a Daniel Stewart hat trick, two from Bryan Simpson and one each from Gordie MacKinnon and Arran MacPhee. Iain MacCall and Craig Morrison were also on target for Cabers.

The tie between Kilmallie and Ballachulish was goalless at half time but scores from Mark Graham on either side of one from Ryan Stewart and a Michael Rodger penalty made it 4-0 to Kilmallie.

The draw for the quarter-finals will be made in Glasgow on Monday 2 June by David Grevemberg, chief executive of Glasgow 2014. So far three Premiership sides are through along with two from the National Division and Skye from the area leagues, with two second round ties still to be played.

In the Premiership, Lovat looked to be on easy street when Graeme MacMillan and Jamie Matheson had them 2-0 up by half time at the Winterton. Neil Campbell and Lewis MacNicol pulled Inveraray level before MacMillan restored Lovat's lead. But Lovat's chances of two points in their game in hand over Newtonmore evaporated with MacNicol's last-minute equaliser.

It was one-way traffic at Dalmally where Oban Camanachd went back top of the Marine Harvest National Division with a 5-0 victory over Glenorchy. Scott MacMillan, Gary MacKerracher, Andrew MacCuish, Aidan MacIntyre and Lorn Dickie all got a goal apiece.