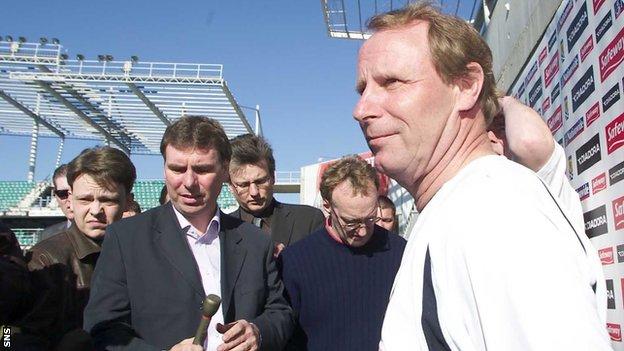 Berti Vogts insists that he has no regrets about becoming the first foreigner to manage Scotland's national team.

The German arrived with an impressive pedigree, but his two-and-a-half year spell in charge was turbulent.

It ended in November 2004 following a 1-1 draw in Moldova, after which Vogts claimed he was spat at by fans.

He denies that now but admits that supporters were entitled to feel angry at the team's performance.

Having won the World Cup as a player, and guided West Germany to the 1996 European Championships title in England, Vogts brought an enviable record into the job when he was appointed successor to Craig Brown.

He described himself as Berti McVogts at his opening media conference but struggled with the language. His attempts to bring younger, more vibrant players into an ageing squad were also met with disdain as he distributed caps to several footballers who never featured again.

"You have to change something," said Vogts as he reflected on his time in charge for BBC Radio Scotland's "Managing Scotland" series. "The players at this time, most of them were over 28 and that's not good enough for international football, you have to give young blood [room] in the team.

"Also, the old boys were not quick enough, the movement without the ball is most important in modern football. There was always waiting and looking for a long ball. That's not my style of football.

Having been told by Sir Alex Ferguson that Wayne Rooney's grandmother was Scottish, Vogts tried but failed to persuade the player to turn out for Scotland. He did, though, bring Darren Fletcher and James McFadden into the national squad.

"He had a good time after the match. It was okay. I know the media are always looking for a good story, and a bad story is a good story. For James, he came back home and then his girlfriend was looking for him

The latter, in particular, rewarded him with some impressive displays and a famous goal to defeat the Netherlands at Hampden in the Euro 2004 play-off first leg - before a 6-0 second-leg loss in Amsterdam - although McFadden also missed Scotland's flight home from a Far East tour after a night out.

"You know James," Vogts said. "Maybe James, he lost his watch somewhere. He was a little bit late, that was all, then he came two days later. That's a young boy, that's okay, that's not a problem.

"He had a good time after the match. It was okay. I know the media are always looking for a good story, and a bad story is a good story. For James, he came back home and then his girlfriend was looking for him.

"The time was not so easy for James, but he's a good boy. He was a cheeky, tricky boy."

There were other setbacks, such as David Weir retiring from international football after Vogts blamed him for some of Scotland's poor defending in a 2-2 draw against the Faroe Islands in September 2002.

"I asked him a question and he said, 'no, I don't do that'," Vogts said. "I have respect for that. It's not a problem. It was the same when I spoke to Lothar Matthaus - 'your time is over, I'm looking for young players' - and we started a discussion about that.

"I understand [when] players say, 'I don't like this', but I'm the coach, I'm the number one and I have to tell the boys what they have to do. That's the job of the coach."

A 4-0 loss to Wales in a friendly ahead of the World Cup 2006 qualifying campaign brought more pressure on Vogts, who was a beleaguered figure as far as some newspapers were concerned. One even offered to buy his plane ticket back to Germany,

Despite how his reign ended, with an angry response from fans following the draw in Moldova, Vogts still holds fond memories of Scotland and visits the country every year.

"When you have no good results, the press attack you," he said. "That's normal in this part of the world. I don't think so many things about the past.

"There was a never a fan spitting at me, never. Bad words, that's normal. It was not a great atmosphere, not a good match and we didn't do well. Then you have to accept it."