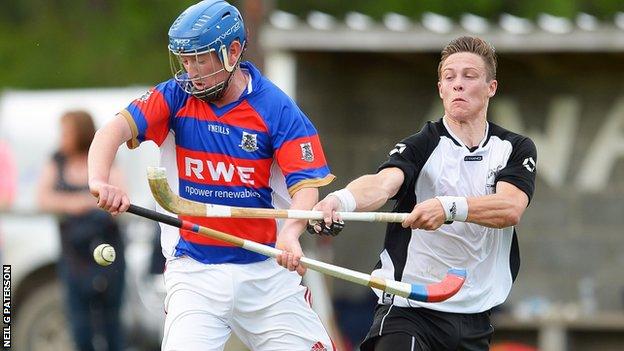 Kingussie grabbed a hard-earned Camanachd Cup quarter-final place with a 2-1 away win over Lovat in their rearranged second-round tie.

The other outstanding last eight berth went to Inveraray, who beat Inverness 6-1 at Bught Park.

The new consolation MacTavish Plate was won by Fort William, 2-1 against Skye after extra-time at Invergarry.

And Newtonmore extended their lead in the Premiership to three points by beating Lochaber 2-1.

At Kiltarlity, Kingussie got an early breakthrough when Thomas Borthwick put them ahead after just four minutes. After an even first half, Kingussie began to assert themselves and Savio Genini got their second. Stuart MacDonald pulled off a terrific save from Borthwick, who also had a penalty blocked by the Lovat keeper.

The game looked over at this point, until Kevin Bartlett pulled one back in the second minute of added time. Then, in one final Lovat attack, Iain Nicholson came inches away from forcing a replay when he hit the side netting from out on the right.

Kingussie will be at home to Kyles in a high profile quarter-final on 5 July.

Inveraray were always strong favourites at Inverness but found themselves in arrears after four minutes when Martin Davidson scored for the area league side.

This provoked an instant backlash and, within 12 minutes, Inveraray were 3-1 up through David MacPherson, Neil Campbell and Chris Crawford. A second half hat-trick from Peter Macintyre completed a comprehensive victory for the Argyll side who go on to meet Glenurquhart.

Fort's Gordie MacKinnon got both goals against Skye in the final of the MacTavish Plate, a tournament for losing first-round sides in the MacTavish Cup.

MacKinnon's first-half effort was cancelled out by Jordan Murchison but the winner arrived in the first period of extra-time.

More are now three points ahead of Lovat, who have a game in hand, but the league leaders were made to work for their victory over bottom side Lochaber. Donald MacRae cancelled out Liam Mullender's opener for Newtonmore before Glen MacKintosh clinched victory.

An early goal from Roddy MacDonald was all that separated Kyles and Glenurquhart at Tighnabruich.

Oban Camanachd stretched their lead in the National Division to three points with a game in hand following a 3-0 victory on Bute. Scott MacMillan followed up a Connor Howe double.

A bad-tempered affair in the same league at Dalmally saw referee David Stafford send off three players from each side as Caberfeidh beat Glenorchy 2-1. Liam Symonds opened for Cabers, Andrew Smith equalised and Neil Rose got the Strathpeffer side's winner.