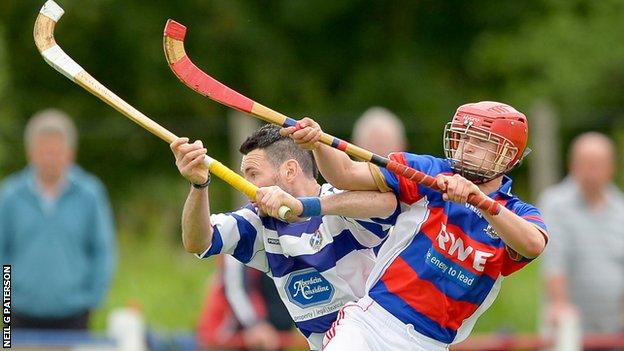 Newtonmore atoned for their Camanachd Cup exit when they beat Kingussie 4-1 away from home to reach the North semi-final of the Artemis MacAulay Cup. Here will meet Lovat who eliminated Fort William 3-0 in Kiltarlity.

Oban Camanachd reached the South semi-final without hitting a ball since Glenorchy were unable to raise a team to travel to the alternative venue of Fort William after their own pitch at Dalmally became unplayable.

Glenorchy had three players suspended after orderings off the previous week. Camanachd's opponents in the South semi-final will be whoever comes out on top between holders Kyles and Glasgow Mid Argyll.

Glenurquhart moved up to third in the Orion Premiership with a 2-1 away win over Lochaber and Inveraray consolidated fifth place when they beat visitors Kinlochshiel 1-0.

A James Hutchison own goal sent Newtonmore on their way against Kingussie in the Badenoch cup derby. Paul MacArthur and Glen MacIntosh made it 3-0 in the second half and while Louis Munro pulled one back for Kingussie, MacIntosh's second restored More's three-goal cushion.

At Balgate, Lovat's goals all came in 17 first-half minutes from a Kevin Bartlett hat-trick. Fort keeper Paul MacKay pulled off a fine save, but the predatory Bartlett was on hand with the rebound for the first and the rest soon followed.

James MacPherson in the first half and Billy Urquhart in the second built up a 2-0 lead for Glenurquhart over Lochaber at Spean Bridge before Stuart Callison's late reply created a tense conclusion to the game, and Lochaber still look for their first win.

In the other Premiership match, all that separated the teams was David Robertson's 81st minute goal for Inveraray against Shiel who sit second bottom.

Kilmallie moved above Caberfeidh in the Marine Harvest National Division when they defeated them 6-2 at home. Martin Munro got a second half hat trick for Kilmallie who also had Ryan Stuart, Liam Cameron and Michael Rodger on the scoresheet. Neil Rose and Ruaridh MacLeman for Cabers, who also had three players suspended following their match with Glenorchy, briefly had the Strathpeffer side ahead.

Glasgow Mid Argyll won 3-2 on Bute with goals from Innes MacMillan, Craig Anderson and Andy Mathie while Chris MacGowan and David Whitelaw replied for the island side.

Anorther island side was more fortunate when a 3-1 victory for Skye over Inverness at Lochcarron saw them through to the Balliemore Cup final where they will meet Aberdour or Ballachulish.

In advance of the RBS MacTavish Cup final in Inverness on 21 June between holders Lovat and Glenurquhart, a long serving official from each club has been recognised in the Queen's Birthday Honours List.

Lovat Treasurer and former Camanachd Association disciplinary committee secretary Mary Ann Henton receives the British Empire Medal for over 40 years of service to shinty. And Alan Bell has been awarded the MBE for services to his local community, including 35 years as President of Glenurquhart.