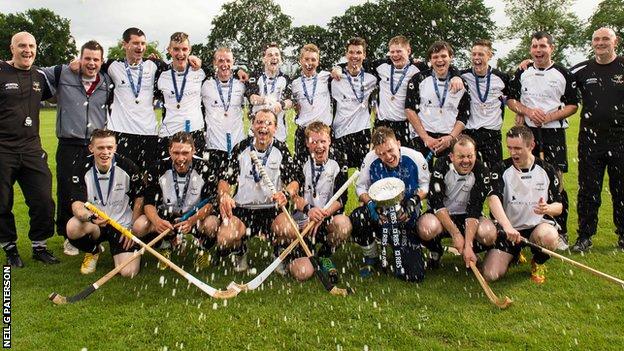 Defending champions Lovat hammered Glenurquhart 5-1 to pick up the first silverware of the shinty season.

Greg Matheson opened the scoring on five minutes and it was 3-0 at the interval after strikes from Kevin Bartlett and Graeme MacMillan.

Lorne MacKay stretched the lead before Lewis MacLennan hit the net for Glenurquhart on 84 minutes.

Mackay knocked in his second goal of the day in the final minute to wrap a fine win for the Kiltarlity side.

Having beaten the same opponents last year, after a penalty shoot-out, this is the eighth time Lovat have captured the trophy while they are the first non-Badenoch team for 80 years to retain it.

And Lovat did it the hard way, overcoming early injury setbacks at Bught Park, Inverness.

Drew Howie and key striker Matheson both started following fitness tests but Howie departed after just two minutes while Matheson, who returned briefly as a rolling substitute later in the game, left after 24 minutes, but not before grabbing the opener.

When Matheson opened the scoring from tight on the right, it was clear that his hamstring was still causing problems, before a knock on the knee further worsened his plight.

Within minutes, MacKay volleyed over from close range and Matheson had a miss from 25 yards just before he left the field for the first time.

Just before the half hour, after some sustained Lovat pressure, Bartlett made it 2-0 and four minutes later MacMillan made it three.

Soon after, MacMillan took a stick on the back of the head and had to come off to have profuse bleeding stopped. He was replaced by Matheson but only for the remaining eight minutes of the second half because the switch was reversed in the second.

MacMillan was barely back on the field when he hit the post, although Glen now threatened to look the brighter side at times. However, Lovat responded when MacKay stroked in their fourth after 64 minutes.

Glen still threatened and Lovat keeper Stuart MacDonald made two superb saves, especially his second from a Neale Reid shot. Then with seven minutes left, MacDonald was at last beaten by MacLennan, but into stoppage time MacKay got his second.

Kyles claimed the last place in the semi-finals of the Artemis MacAulay Cup when they beat Glasgow Mid Argyll 3-0 away. Grant Irvine opened and Roddy MacDonald followed up with a double.

At Spean Bridge, Lochaber got just their second Orion Premiership point from a 2 all draw with Inveraray. Stuart Callison and Shaun Nicolson scored for the home side while Neil Campbell and Chris Crawford replied for Inveraray.

Kilmallie rose to second place in the Marine Harvest National Division with a 4-1 home win over Beauly while Arran MacPhee got a hat-trick as Fort William thumped Caberfeidh 7-2 in Strathpeffer and Glenorchy defeated Bute 3-1 at Dalmally.

Eleven-man Ballachulish defeated Aberdour 3-1 to reach the Balliemore Cup final where they will meet Skye.