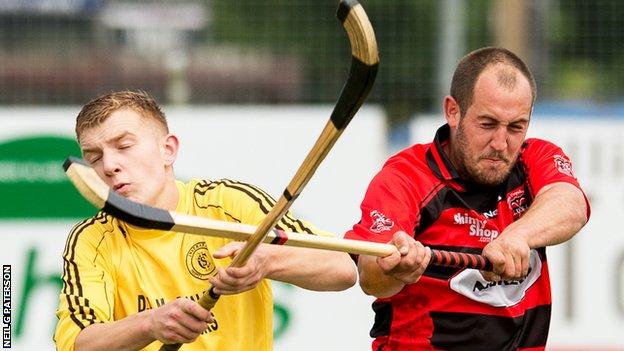 Kingussie will be favourites for this season's Scottish Hydro Camanchd Cup following a 1-0 quarter-final victory over 2012 winners Kyles, where the Badenoch men defended their lead for 89 minutes.

And the semi-final draw will also include two lower league clubs, with Skye and Fort William also progressing.

Skye from third tier North Division 1 eclipsed 10-man Kilmallie 4-1 in Portree, including a hat trick from Jordan Murchison, while Fort William edged Kinlochshiel from the Premiership 1-0 in Balmacara.

Completing the last four will be Glenurquhart who ousted Inveraray 3-1 in Drumnadrochit.

Savio Genini netted for Kingussie in the opening minute against Kyles who had eliminated Newtonmore in the previous round and that was enough to ensure a place in MOnday's draw at Eilean Donan Castle.

Skye are still on maximum league points and have conceded only one goal so it was no huge shock when they progressed at the expense of Kilmallie from the division above.

The scoreline may have been more comfortable, with two goals from Murchison and one from Shockie MacLennan coming in less than half an hour.

Martin Munro pulled one back for Kilmallie before Murchison completed his hat trick late on. Kilmallie's cause was not helped by red cards for Peter Carmichael and Michael Rodger.

In Balmacara, Gordie MacKinnon scored for Fort William in the first half and Kinlochshiel could not reply so the second tier side progressed.

At Drumnadrochit, Lewis MacNicol opened for Inveraray but, as in the previous weekend's Celtic Society final, the Argyllshire side went ahead and then collapsed as James MacPherson equalised and then, along with Neale Reid, put the game in the bag for Glenurquhart when they made it 3-1 in the last seven minutes.

Five different scorers gave Oban Camanachd a comfortable 5-0 home win over Caberfeidh to keep Camanachd top of the Marine Harvest National Division. A second-half double from David MacLean handed Beauly a 2-0 success on Bute and they remain a point behind Camanachd but with three extra games played.

Aberdour beat Strachur 3-2 in the final of the South of Scotland Senior Plate for first round Celtic Society Cup losers.