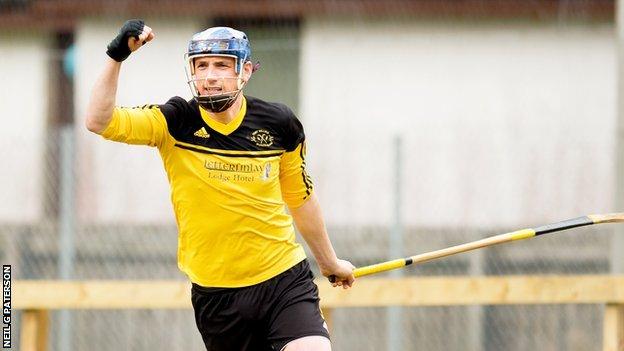 I'm just home and lobster red after spending this week coaching at the national shinty camp in Strathallan.

For one week each year, the very best of the country's top players from under-17 level are submerged in fitness, coaching and team building exercises to enhance their skills and abilities within the game.

With nearly every club in Scotland represented with players, it's not only a fantastic way to learn from each other, but for the guys to make new friends from the various clubs and districts that will more than likely stay with them throughout their playing careers.

Congratulations to Newtonmore's Craig Ritchie, who picked up player of the camp, Kilmallie's Craig MacIssac for most improved player and Beauly's Josh Grant for being most committed.

A special mention goes out to Oban Celtic's David Martin, who had to go to Perth A&E to try and get his kneecap popped back in after a stick accidentally knocked it out.

David, now in a leg brace for four weeks, was not deterred by this and refused to go home as he wanted to stay for the remainder of the week with the lads, as this was his last year of under-17 camp.

Subsequently he picked up the award for longest ball hit with a crutch! Thankfully he was the only one in the running for this award.

It was a real pleasure to be back in amongst so much enthusiasm for shinty, which in turn gave me a boost and rekindled my deepest passion for our incredible sport.

It's getting increasingly difficult for myself to fulfil fixtures with Fort William during the summer months as I'm so often away playing music, which has a knock-on effect for personal drive, desire and consistency.

However, having spent the past four days with 80 young men that would run through walls to get to the ball, you cannot help but remember that same sense of enthusiasm.

Well done to everyone involved once more and I look forward to seeing you on the park and off the park as your shinty careers develops over the coming years.

I just ask though to please be mindful and vigilant, to the old fella that looked after you at the camp in 2014, when tearing through that wall. The mortar that's holding this old wall up is not as strong as it used to be!

Safe travels to all clubs and supporters this weekend.