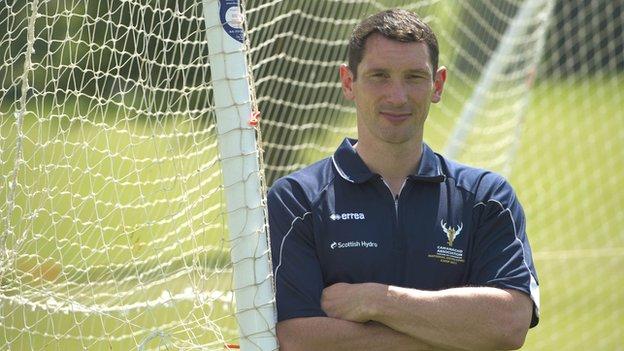 As we bid farewell to the Commonwealth Games, I know, without question, the majority of Scotland will be turning their attention to shinty's Camanachd Cup.

Shinty's showpiece, the medal that every player dreams to hold, the very reason you pick up a stick as a child.

It was even rumoured the only thing Alex Salmond and Alasdair Darling could agree on after their midweek debate was their excitement regarding this weekend's first Camanachd Cup semi final!

This Saturday, Fort William collide with Kingussie in the first of the semis.

Fort William, having dropped a division this season, have had a great start to their rebuilding campaign.

They are on an unbeaten run in the National Division and they have had a wee dod of silverware to help boost morale, after lifting the first ever MacTavish Plate over Skye, in June.

Kingussie, however, have far more experience throughout their squad. They are still playing at Premiership level and having beaten local rivals Newtonmore last Friday for the first time in three seasons will no doubt have given the Badenoch club a huge boost before heading into this match.

Kings also have the luxury of shinty's most prolific goalscorer returning to their squad, the man the media have dubbed "Ronaldo of the Glens".

Yes, just when you thought you'd heard the last of him, the legendary Ronald Ross MBE will pull on his famous Kingussie number 11 jersey for the semi final.

The return of Ronald to Kings' first team squad a month ago will undoubtedly add confidence to Kingussie and send a shiver down the backbone of the young Fort William defence,

However, as underdogs and with nothing to lose, the An Gearasdan men have their own chance to make a little part of history, as no team has ever made a Camanachd Cup final playing outwith the top tier.

Fort management duo Adam Robertson and Victor Smith played the last time Fort William won the Camanachd Cup in 2010, beating Kingussie 3-2 at The Bught Parks in Inverness with a goal in the last minute.

They have gained every experience possible throughout their playing careers and will relish the task of taking on their old rivals as managers.

So who is your money on for this weekend?

Do you think Kingussie will be too strong for the new-look Fort team? Or do you think Fort William with their previous record in the Camanachd over the past decade will manage a wee surprise result?

Skye's and Glenurquhart's eyes will also be glued to this match as they prepare for their semi-final showdown at the same venue next week.

I am absolutely gutted to be missing the match as I'm on tour in the US with the band, but I have set up the laptop so I can wake up early in La Crosse, Wisconsin and catch all the action live over breakfast.

The question is, will it be a champagne breakfast, or dry toast, hard to swallow?

Very best of luck to my Fort team mates on Saturday and safe travels to Kingussie and their travelling support.