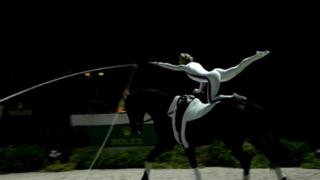 The vaulting competition began at the World Equestrian Games today, featuring a Scottish dentist defending her world title in the sport of gymnastics on horseback.

Joanne Eccles and her sister, Hannah, both competed for Britain in their opening compulsory test on the first of four days of action.

Their dad, John, is shown controlling their horse during each of their routines - a role known as the "lunger".

The World Equestrian Games are being held in Caen, Normandy.