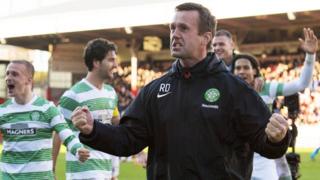 Celtic manager Ronny Deila speaks after the late 2-1 victory over Aberdeen at Pittodrie and remarks that he is pleased by the team spirit shown during and after the game.

The Scottish champions celebrated with fans at the end of the game after defender Virgil van Dijk tapped home the winner close to the final whistle in a win that sees the Glasgow side sit top of the Scottish Premiership.