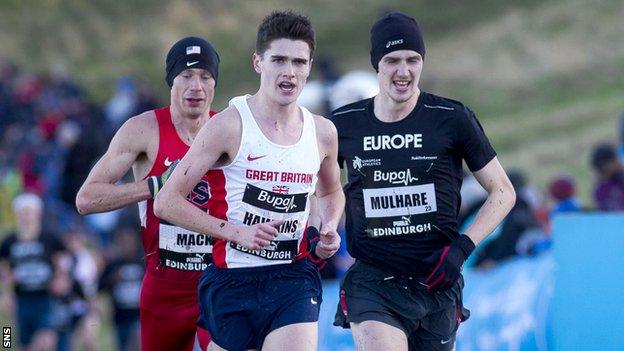 Callum Hawkins, Andrew Butchart and Luke Caldwell will test themselves against Farah in the 8k race.

Rhona Auckland and Jonny Glenn of Scotland will also pull on the Great Britain vest for the event.

Scot Chris O'Hare, who is based in America, will run in the 4k international race.

Farah will be making his first appearance in 2015, competing for Great Britain in his first cross country race since winning at the event in Edinburgh in 2011.

"I'm looking forward to returning to the Great Edinburgh Cross Country to kick off my season," said Farah.

"For many years I ran cross-country to build my base for the summer track season and it will be nice to return to Edinburgh and try to repeat my winning run of 2011 there."

Auckland goes into the event fresh from her victory in the European under-23 championships.

She will be the only Scot in the Great Britain women's teams, with Steph Twell heading to Australia.