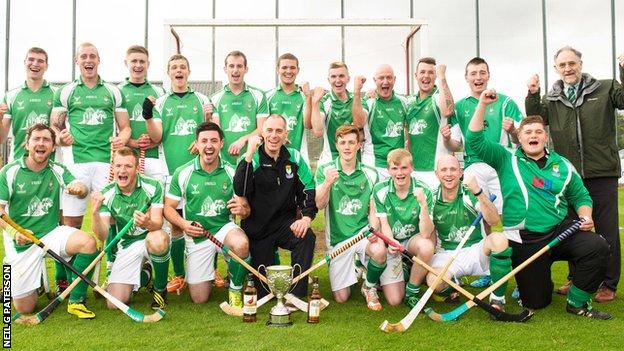 Lochaber climbed to second in the table courtesy of a 3-2 win against Glenurquhart at Drumnadrochit.

Kyles moved into the top half of the table with a 4-1 win over Inveraray.

Newtonmore's goals in the early throw up at The Eilan against Kinlochshiel came in the first half through Jamie Robinson and Evan Menzies.

Although this was a top-of-the-table clash, the game of the day was arguably between MacTavish Cup holders Glenurquhart and Lochaber.

Both sides arrived on the back of three straight league wins and the victor was guaranteed second place.

Glen had first half wind advantage and got off to a flying start with a fourth minute goal from Iain MacLeod, with Shaun Nicholson equalising on the half hour.

Glen, despite pressing, were unable to find an equaliser.

The result leaves Newtonmore on 18 points, three ahead of Lochaber who were only spared relegation by last year's decision to return to a 10-team Premiership.

At Tighnabruich, a goal early in each half from Kyles' Roberto Zavaroni bracketed one each from Dunkie Kerr and Roddy MacDonald before Euan McMurdo reduced the deficit.

Inveraray remain in the relegation play-off place, five points adrift of guaranteed safety and one point clear of bottom side Oban Camanachd who have two games in hand.

In the Balliemore final at Kingussie, Ross opened for Beauly and Angus MacKintosh equalised for Mid Argyll.

However, the game was effectively over by half time after the prolific Ross added three more and Sean Stewart also scored to make it 5-1.

John Don MacKenzie made it 5-2 but Beauly were never really in danger as Mid Argyll's third came from a Craig Anderson penalty in the final minute.