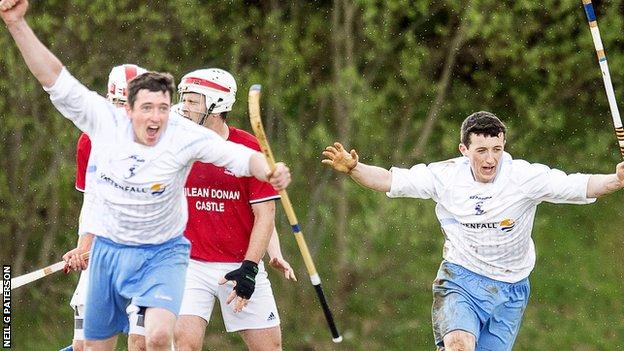 A late equaliser from Skye's Jordan Murchison in Portree confirmed a 1-1 scoreline in the first West Coast derby for many years following Skye's return to the Marine Harvest Premiership.

However the single point was still enough to send opponents Kinlochshiel top of the table.

The four pointer in Drumnadrochit to escape the relegation play off place gave Glenurquhart their first Premiership victory for two months, 2-0 at home to Lochaber.

Mid table, a late surge gave Lovat a 3-1 success at Kingussie but without a change in league placing for either side.

And in the National Division, Kilmallie's 5-1 victory at Ballachulish means that they trail leaders Glasgow Mid Argyll only on goals scored.

There had been much pre-match build up as Kinlochshiel prepared for their first trip across the Skye Bridge for a long time on serious shinty business and it was the visiting side who opened the scoring through Duncan DA MacRae after just 12 minutes. And there it looked as if it would stay until the penultimate minute when Murchison secured a share of the points.

However Skye, with four draws in five games, still seek their first victory. Although Shiel are now a point clear of previous leaders Kyles, whose Celtic Society Cup tie in Oban was postponed, they have also played three more games.

Glenurquhart, their defence of the MacTavish Cup already at an end and sitting second bottom in the league, were desperate to kick start their season on the visit of Lochaber. After a goalless first half, David Smart opened the scoring early in the second and Conor Golabek put the points in the bag late on. This leaves Lochaber in the play off place on goal difference and with two extra games played.

At The Dell, Kevin Bartlett put Lovat ahead midway through the first half and Thomas Borthwick got Kingussie's equaliser shortly after half time. Greg Matheson gave Lovat the lead again but it was only after Euan Ferguson's third in the final minute that they could breathe easily.

After Lorne Brown scored first for Ballachulish, Kilmallie bit back with a hat trick from Duncan Rodger, which included a last minute penalty, bracketing a Liam MacDonald double. They have scored just three goals fewer than Glasgow Mid Argyll who were the day's top scorers in senior shinty when they ousted hosts Taynuilt 8-0 in the Camanachd Cup.

The other National Division game was in Inverness where Grant Griffin scored twice in the second half to help Inveraray to a 3-2 victory.