Scotland's Paul Lawrie says he is "honoured" to be named one of European vice-captains for the Ryder Cup against the United States in September.

The former Open champion will be part of Darren Clarke's backroom team at Hazeltine, Minnesota, alongside Thomas Bjorn and Padraig Harrington.

Lawrie, who will make his debut in the backroom staff, tweeted his reaction.

"Delighted and honoured to be announced as vice captain @RyderCupEurope," he said.

Bjorn performed the same role in 2010 and 2012, while Harrington was one of Paul McGinley's vice-captains in 2014.

Lawrie played in Europe's defeat at Brookline in 1999 and the win at Medinah in 2012. 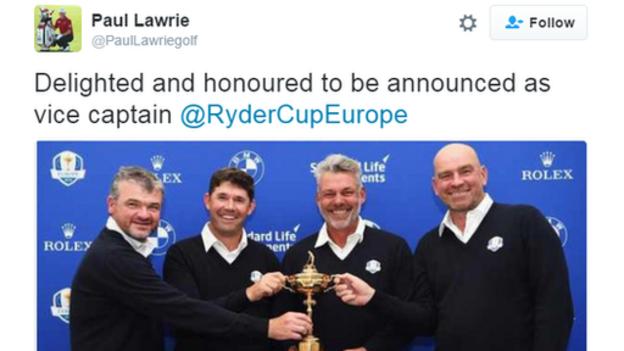 Europe are seeking an unprecedented fourth straight victory and their ninth in the last 11 biennial contests.

"The three bring a wealth of experience and knowledge and their input will be invaluable to Europe's cause," said Clarke.

"I could not have asked for anybody better to be standing shoulder to shoulder with me in the bid to bring the Ryder Cup home."