Muhammad Ali, heavyweight champion of the world, was beyond renown. Neil Armstrong, Winston Churchill, Pele and Charlie Chaplin were all icons of the 20th Century, but Ali was in a galaxy of his own.

The trinity of fights against Joe Frazier, the Rumble in the Jungle with George Foreman and those old grainy black and white pictures of the Sonny Liston fights, which were hardly fights at all.

He walked with the sporting Gods. He had the keys to their pearly gates.

I couldn't get enough information about him. Long before the internet and YouTube, I devoured books about him. I was glued to his television interviews.

So it was a curious thing on a winter's morning back in 1993 when the editor of Reporting Scotland despatched me to meet the great man.

Sadly not at Madison Square Garden, nor Louisville, nor the Philippines nor Kinshasa. The passport could remain in the bedside drawer.

Ali was appearing at a bookshop in Glasgow city centre, now disappeared, at the corner of Gordon and Union Street. It was Elvis rolling up to the back room of your local.

He had been wheeled in to promote a book about his life, 'Muhammad Ali: A Thirty Year Journey', the tale in pictures of the previous three decades. It was compiled by Howard Bingham, who had photographed his great voyage and who was with him on the day. He clearly had his trust.

Here, shaking my hand and agreeing to my request to autograph a copy of the book was a man who had re-invented his sport in the glory years of heavyweight boxing. A man who used a sense of showbiz to engage with the fight game people who thought southpaw was something to do with Crufts.

His Parkinson's disease was in an advanced state even then. In fact, customers who queued with their purchase had to satisfy themselves with a previously penned autograph on a sticker. My book, treasured from that day to this, was signed on page one before my very eyes. 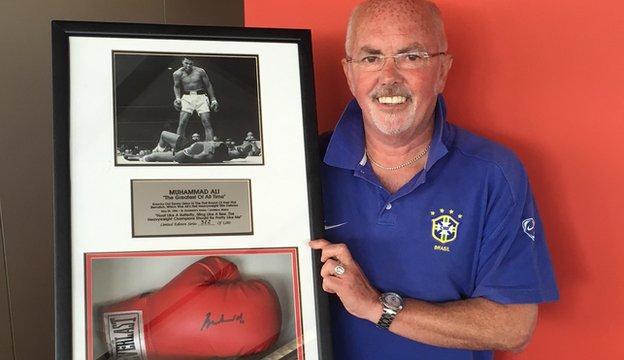 I nurse too the autographed right boxing glove (above) I have, signed as number 322 of a limited collection of a 1000, framed with a picture of Ali standing over Liston in that iconic pose from their second bout in Maine in 1965.

Curiously, in years to come, I was to meet my other sporting hero, Pele. Again I wasn't shy at asking the great Brazilian for his autograph on the two occasions at the 1998 World Cup at which I had the chance to interview him, the draw in Marseille and the eve of the opening game in Paris.

In Ali, we have lost a great man. The greatest as it happens. His self-description would have passed the Trade Description test.