What on earth just happened? How have I actually missed that? Is this what will define me now?

These were my thoughts immediately after I missed THAT open goal. Being a proud Scot who had been dreaming of pulling on the dark blue jersey since I first kicked a ball, the last of those thoughts was particularly difficult to have roaming around in my mind as I stood stunned on the Hampden turf.

But I soon realised my football career would not become defined by one momentary lapse of judgement.

That miss against Norway was a low which ultimately, I like to think, represented a bump in the road of an otherwise successful journey through professional football lasting over two decades - representing my country, enjoying five promotions, and collecting two cup winner's medals.

You cannot dwell too much on any single moment because it will impact upon the next performance. The highs are to be celebrated but, like the lows, are also to be learned from.

Learning has been a big part of my life since I retired from playing in 2014. I completed a professional sports writing and broadcasting degree at university, achieved a governance qualification, which means I'm now qualified to become a non-executive director on any organisational board, and currently hold the position of trustee on the board of Stoke City Community Trust. I also split my time between managing a property portfolio and working as a football pundit.

When I reflect on all of this, it is hard to believe I am talking about myself, the kid who was never picked to play for his primary school football team but ended up walking out at Hampden Park to represent his country.

'I no longer want to normalise indirect racism'

This was something I had never thought about too deeply until recently. How did I make that journey, from the overlooked child to the adult who was so proud to pull on the national jersey?

Were there - perhaps - any influencing factors which, as a youngster growing up in Scotland during the 1980s, I simply did not recognise at that time?

My family were the only black family in our small village and I was the child of a Nigerian father and Scottish mother.

Throughout my life I have seen and experienced direct racism and as a youngster there were other issues that, looking back, I now consider were episodes of indirect racism.

Yet at that time I normalised this, I accepted it. Today, I no longer want to do this because I feel we are in a safer environment in which we can broach the subject and stand united against racism. 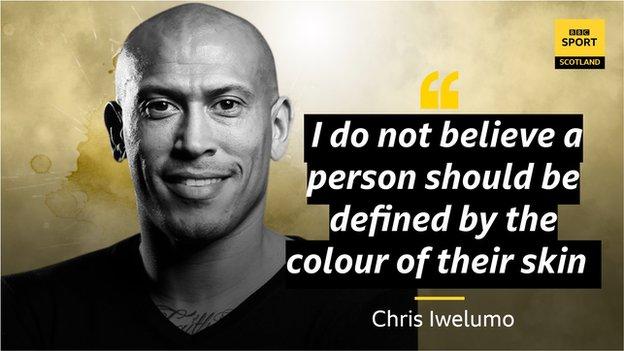 This is just my own story, but I want to explore the stories of other black sporting professionals. I want to hear how they have coped with their highs and lows and the challenges, if any, that they have experienced due to the colour of their skin.

Working with BBC Sport for Black History Month means I get to interview fellow black sporting professionals and I can't wait to share their stories with you.

I am thrilled to be handed this responsibility as October shines a light on the achievements of black people in Britain and allows them to celebrate their successes in the comfort of their own skin.

In the words of Carol Moseley-Braun: "Defining myself, as opposed to being defined by others, is one of the most difficult challenges I face."

But we will all get there in the end.

Chris' first interview with Ifeoma Dieke, former Scotland defender and Olympian, will be available across BBC Sport on Sunday 4 October.