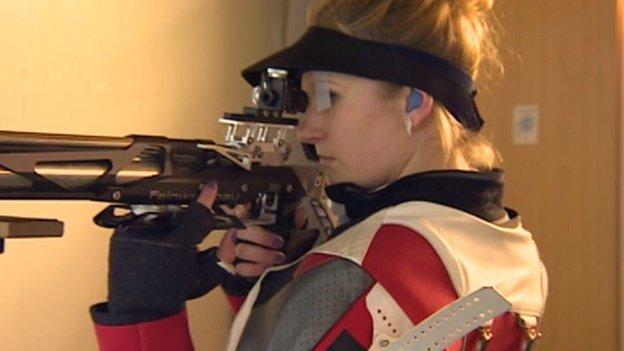 Teenage shooter Larissa Sykes has said an England call-up for the Commonwealth Games would cap a brilliant 12 months.

The 17-year-old from Suffolk made her World Cup debut for GB last year and won the British junior womens' air rifle title.

"Last year was big for me. Going to my first World Cup at the age of 17 was amazing," she told BBC Look East.

"Being able to compete at the Commonwealth Games will be brilliant. But it's in the panel's hands."

She added: "I've done everything I can do. I've made the qualifying score and shot a very high average throughout the year."

The Cambridge-based athlete, who is part of GB's squad for events in 2014, trains with British team-mate Jenny Corish at the Gogs Rifle Range.

for her third Commonwealth Games this summer, so could face her club-mate in Glasgow.

"I came into the sport four years ago and Jenny came here three years ago," said Sykes.

"Being a young shooter, seeing people like Jenny and competing with your idols was brilliant."

Sykes has just competed in the Meyton Cup in Innsbruck, Austria, where she finished 15th in the 10m air rifle, and will switch to the junior division at the IWK Munich event later this month.