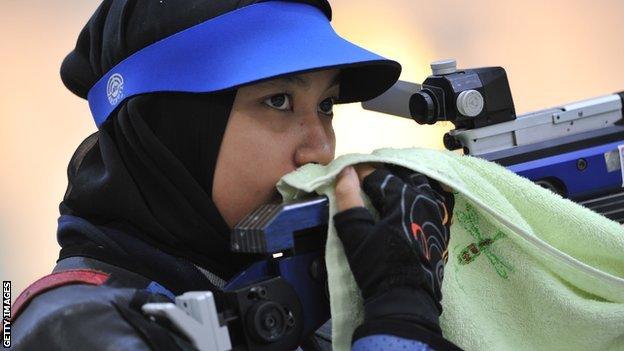 The Malaysian's luggage failed to show in time for Monday's registration ahead of the competition's start on Thursday.

"It is really painful for her," said team manager Musa Omar.

"The rules clearly state that a rifle shooter must wear a jacket.

"We tried to borrow one but it did not fit her. We tried to make a new one but she said that she would need two months to get used to it."

A tearful Ayuni wanted to return to Malaysia, but has been persuaded to stay and support her replacements in the two events.

"This is all so unfortunate," added Musa. "She's taking it badly. She is sad, we are all sad."

Meanwhile, the Malaysia Commonwealth Games team will pay tribute to the victims of the Malaysia Airlines tragedy during Wednesday's opening ceremony.

Flight MH17, travelling from Amsterdam to Kuala Lumpur, crashed in Ukraine last Thursday, killing all 298 people on board.

Forty-three Malaysians were among those who died.

Australia's Commonwealth Games representatives held a minute's silence during a team meeting on Monday as a mark of respect to their 27 compatriots who lost their lives in the crash.