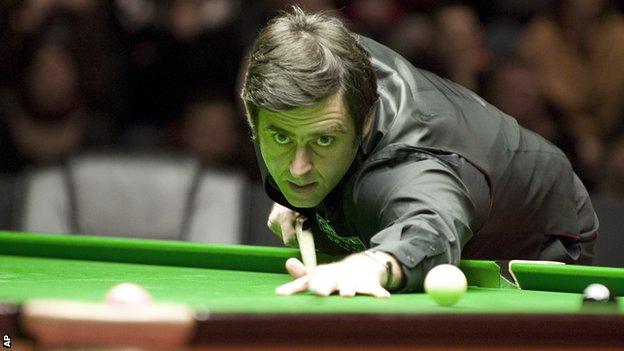 Ronnie O'Sullivan reached the quarter-finals of the Welsh Open with a 4-1 victory over Mark Williams in Newport.

The Englishman knocked in breaks of 125 and 96 on his way to an impressive win.

He will next face Judd Trump, who beat him at this season's UK Championship and Masters, after the left-handed star beat Stuart Bingham 4-1.

An opening frame break of 81 gave Allen the lead before he fought his way back from 58-22 down with the help of a snooker to win the second. A disconsolate Hendry then conceded the third despite only needing two snookers, and Allen sealed the win with a 68 break in the fourth.

After the exit of Williams, Welsh interest in the tournament ended as Welshman Matthew Stevens lost 5-2 to Scot Stephen Maguire, who will face Mark Selby - a 4-1 winner over Martin Gould - in the quarter-finals.

Trump lost the opening frame to Bingham, but then dispatched his opponent in a little over 40 minutes with breaks of 73, 73, 100 and 49 to book a last-eight date with O'Sullivan.

"It's always nice to play Ronnie," said Trump. "He won the last tournament and he's playing well, although Mark Williams had chances against him today. I'm confident of beating anyone."

O'Sullivan, after securing his place in the World Championship with his win over Marco Fu in the previous round, is aiming for a second consecutive ranking tournament victory.

"I started off well and sometimes it's difficult to make centures all the time. The balls just ran for me," said O'Sullivan after beating Williams.

"All credit to Mark because he didn't play his best but he has had a brilliant season. The last two or three years, he has been one of the most consistent performers and for me to get a victory over him, especially with the last two years I've had, is good."

"My form has turned around a bit this year. I prepared myself to qualify for the World Championship but managed to get myself out of jail."

Having won the German Masters earlier this month, his first major title since the Shanghai Masters in 2009, O'Sullivan seems to have found a renewed focus and started the match with a brilliant 125 break.

Williams, who has not beaten O'Sullivan in 10 years, was not to be outdone, as he knocked in a superb 133 in reply.

It looked like it would be a close contest, but Williams was unable to notch another frame.

Having missed a red in the third, O'Sullivan cleared up with a tremendous 96 and once again punished Williams for missed pots by taking the following two frames and the match, to set up a quarter-final clash with Trump.

Maguire stole an early march on Stevens by taking the first two frames before the Welshman hit back with an excellent break of 84 in the third.

Maguire quickly reasserted his authority by compiling 111, but a 66 from Stevens in the fifth frame kept the contest alive before the Welshman missed the final red down the side cushion which would have levelled it in the sixth, allowing Maguire to make a clearance and progress.

Stephen Lee beat Tom Ford 4-1 in the remaining match as he built on a stunning opening break of 129 to seal a comfortable win. Lee will play Ding Junhui in the quarter-finals.