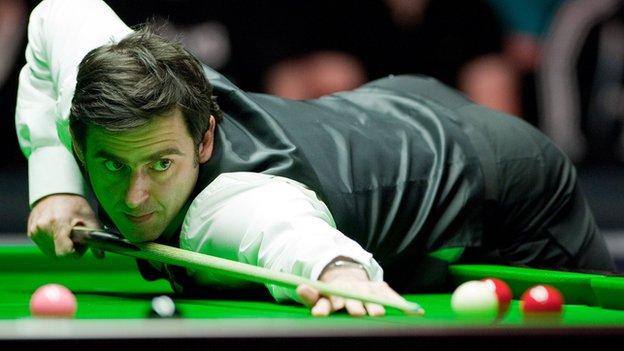 A rejuvenated Ronnie O'Sullivan beat Judd Trump 5-3 to reach the semi-finals of the Welsh Open in Newport.

A gripping match, played to a very high standard, saw three century breaks, including a 139 from O'Sullivan.

The players traded frames until the sixth, before the three-time world champion claimed the final two to complete another impressive victory.

"The Rocket" will next face Mark Selby, a 5-3 winner over Stephen Maguire, while Shaun Murphy beat Mark Allen 5-4.

Murphy will play Ding Junhui - who edged an error-strewn final-frame decider 5-4 against Stephen Lee - in the opening semi-final.

O'Sullivan said after completing his victory: "I just wanted to play my game, give him [Trump] something to think about and impose my game on him.

"I enjoy playing Judd and you know you're going to get your chances. He goes for his shots and you need to score heavy to punish him when he misses. You never know if you have left him safe or not.

"When you're playing under those circumstances it keeps you under the kosh. I used to do that to players, now I know how they felt."

As long as Ronnie turns up mentally, he always seems to play well

Trump had the upper hand over his opponent going into the match, with five wins compared to O'Sullivan's three, including recent triumphs in the UK Championship and the Masters.

But the 36-year-old played a conservative game, hitting safety shots when necessary and taking his chances when in amongst the balls. It was the safety battle he edged to claim victory.

Bristol-born Trump opened the match well, and although he never had complete control of the cue-ball, some tremendous potting saw him compile a break of 109.

O'Sullivan responded brilliantly with a century of his own, amassing 101, and a close match looked set to be on the cards.

He took the lead with an 88 in the following frame after Trump surprisingly missed a red to the middle pocket, but a knock of 63 was enough for Trump to level the match at 2-2.

O'Sullivan came out after the mid-session interval firing, stroking in a wonderful break of 139 which included 14 reds and 14 blacks.

But once again, 22-year-old Trump showed grit and determination by responding with an 88 break.

However, O'Sullivan - who is aiming for a second successive ranking tournament win after his victory in the recent German Masters - took a rare scrappy frame, leaving him needing only one more to progress. He duly took it to set up a clash with Selby, who beat him 9-8 in the 2008 Welsh Open final.

"Ronnie played great in the German Masters final and as long as he turns up mentally, he always seems to play well," said the world number one after emerging victorious from a tight battle with Maguire.

"At the moment he seems to have a great perspective and I am going to have to play at the top of my game to stand a chance."

Murphy was the second player to book his spot in the semi-finals after a narrow 5-4 victory over Allen.

The Northern Irishman took the opening frame but the Englishman raced into a 3-1 lead which included a break of 98.

But the 25-year-old hit back after the mid-session interval to lead 4-3, smashing in a century in the process.

However Murphy, who recently lost to Neil Robertson in the final of the Masters, took the last two frames to set-up his last-four meeting with Ding.

Lee passed up a glorious chance to win as he looked to clear up the colours, appearing to blame a mobile phone going off in the crowd as he missed the green and let Ding back in to win.