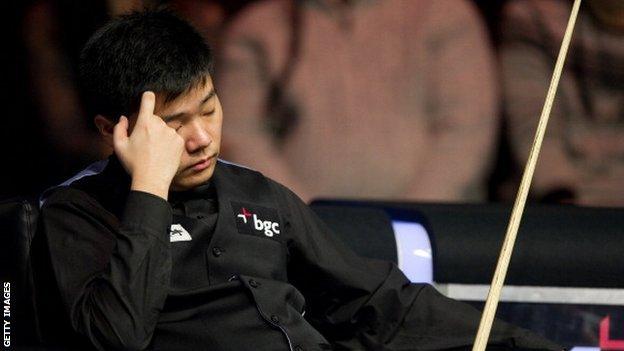 Ding Junhui went out of the World Open at the first round stage after a shock defeat to wildcard entrant Jin Long.

Ding, who had won the Welsh Open just nine days earlier, suffered a 5-1 loss in Haikou to his fellow Chinese player.

After taking a 3-1 lead going into the interval, Jin did not look back, hitting a 76 break in the fifth frame before clinching a famous victory.

Higgins beat Marco Fu 5-3. Fu had smashed in a maximum 147 break in the qualifiers, but was unable to defeat the four-time world champion, who will face either Martin Gould or Jamie Cope in the next round.

Trump advanced after whitewashing Andrew Higginson 5-0. The Romford-based left-hander had a highest break of 111, and will next play the winner of the match between Mark Allen and Jimmy Robertson.

Michael Holt and Stephen Lee also won their matches without conceding a frame against Stuart Bingham and Dominic Dale respectively.

Elsewhere, there were wins for Shaun Murphy, who defeated Ricky Walden 5-3, and Graeme Dott, who won 5-2 against Barry Hawkins.