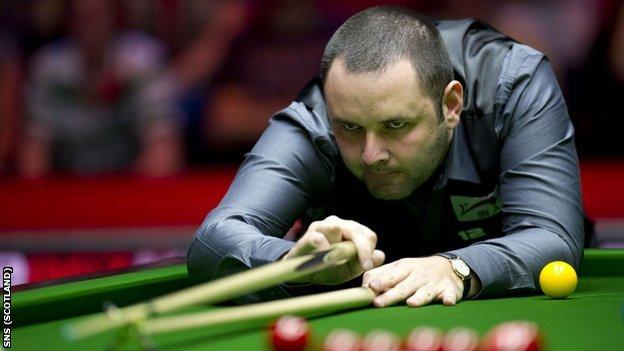 Lambs are beginning to spring. Students have exams on their minds. And the best snooker players on the planet are arriving here in Sheffield dreaming of being crowned world champion.

Most years one player stands out as having the best chance - a player in form who is head and shoulders above the rest, perhaps someone with something to prove.

This time, though, it's different. No name trips off the tongue when plumping for the 2012 winner.

Judd Trump is the bookies' favourite at 5/1 but, since winning the UK Championship in December, last year's beaten finalist has not been in great form.

Twelve months ago all the talk surrounded John Higgins. Returning after his ban for bringing the game into disrepute, he had something to prove.

Lifting a fourth world title was the proof that he is a Crucible great and, as such, cannot be discounted this time around.

Three other Scots travel to Sheffield with glory on their minds, Stephen Maguire being the pick of them after reaching two finals this season.

On both occasions he collected the runner's-up cheque.

The Glaswegian has always been seen as a potential world champion. His results this season show that his game has moved up a level. The world number seven has as good a chance as any.

Graeme Dott is a player who deserves greater recognition. A winner in 2006 and twice a beaten finalist, he is sometimes referred to at the Crucible as the "Scottish Workhorse", given his ability to grind out performances.

While others grab the headlines, the "Pocket Dynamo" quietly goes about his work. It would be no surprise to see him progress to the later stages.

Then there is the greatest. The seven-time world champion may not be the force of old but a gathering at the Crucible without him is unthinkable.

This is his 27th consecutive year in Sheffield and many will hope his stay goes beyond , ranked 16th in the world.

The draw has grouped all four Scots in the same half, which rules out a tartan final.

But, with this year's World Championship being one of the most open for many a year, don't be surprised if the player giving the victory speech has a Scottish accent.

Then again, don't be surprised at anything that happens here at the Crucible over the next 17 days.