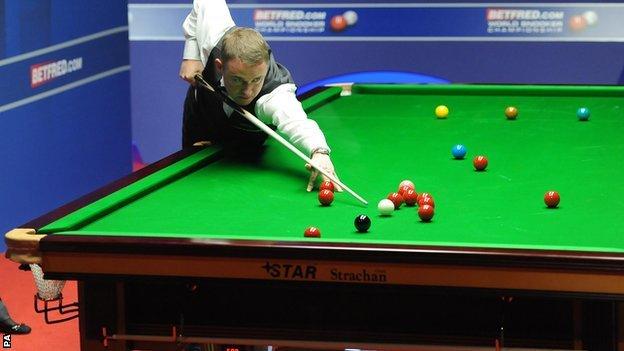 Stephen Hendry outclassed Stuart Bingham at the Crucible to set up a tantalising second-round clash with defending champion John Higgins.

Hendry, looking for his eighth world title, wrapped up a 10-4 victory after going into Sunday's evening session with an 8-1 advantage.

Bingham showed courage by winning the first three frames but 43-year-old Hendry took the next two to progress.

Higgins, with four World Championships, beat Liang Wenbo in the first round.

Remarkably, it will be the first meeting between the Scottish pair in Sheffield, having won 11 world titles between them.

The two have made the most century breaks at the venue and snooker followers will be delighted to see them finally facing off in the showpiece tournament.

Hendry, who had to qualify for the championship having lost his top-16 spot, had the task of negotiating his way past Englishman Bingham, and was favourite to go through after a blistering opening day session.

Bingham would have needed a perfect session if he were to overturn the seven-frame deficit suffered in the opening period which include the magnificent maximum 147 break.

And he made the ideal start, knocking in a 52 to settle any nerves. The comeback trail was well and truly on when he clawed back another frame.

Hendry was looking frustrated having been kept off the table, but the Scot still held a commanding lead.

The advantage was being whittled down though, and Basildon-born potter Bingham may have seen some light at the end of the tunnel after taking the 12th.

"Hendry's performance yesterday would really have delighted him, especially to produce a performance that he says he has been doing on the practice table. He might be a little bit disappointed with tonight but he should just look at the positives."

However, Hendry had been through it all before on numerous occasions and took the following frame to go one shy of victory.

And he finished with a flourish, pocketing a break of 96 and booking his place in the next round.

Meanwhile, 2010 champion Neil Robertson, who went out in the first round last year, defeated the 1997 winner Ken Doherty 10-4.

"Job very well done tonight and if Ken had a bit more luck the score could have been a lot closer. Very happy to be in the 2nd round," Robertson tweeted after the match.

Having gone behind 7-2 in the opening session, the Irishman notched the first and third frames to go 8-4 behind, but Australian Robertson knocked in a crucial 72 break and took the 14th to book his place in the second round.