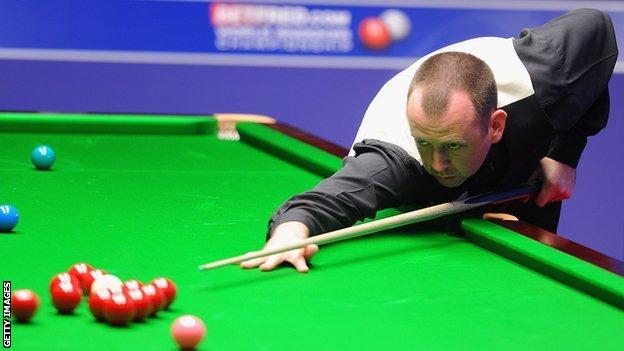 Mark Williams defeated Liu Chuang 10-6 in the first round of the World Championship to set up a match with Ronnie O'Sullivan.

The two-time world champion won six frames in a row and needed one more for victory before Liu launched a comeback.

He took the next three frames but missed a red, allowing Williams to seal victory with a 33 break.

O'Sullivan has won each of the three times he has met Williams in Sheffield, with their last meeting coming in 2010.

O'Sullivan v Williams at The Crucible

But world number four Williams will be confident about his chances of a first Crucible triumph over 'The Rocket' after reaching the semi-final last year.

Liu, making his second World Championship appearance, was showing plenty of fight in the opening stages of the match, until the Welshman took the last three frames to take a hold on the encounter.

Williams, who was jeered into the arena in the first session after his less than complimentary remarks about The Crucible, started the second in a positive manner. A break of 72 was enough for him to extend his lead, and he took the following frame too, making it five in a row in total to go 8-3 up.

The 21-year-old Chinese player looked dejected as he sat in his chair, watching on as Williams went one frame from victory.

But Liu showed spirit to pull three frames back with some majestic potting as Williams missed opportunities to clinch the match.

However, the deficit proved too big and his opponent wrapped up the win.

Earlier in the day, Carter eased into the next round of the championship at the expense of Davis.

The world number 17, who was runner-up in 2008, took an 8-1 lead in the first session with some heavy scoring.

A century break and three other 60-plus efforts meant Davis was facing a heavy defeat going into the final session.

He could only pull one frame back and Carter wrapped up the match in style with a break of 132 to set up a clash with last year's runner-up Trump.