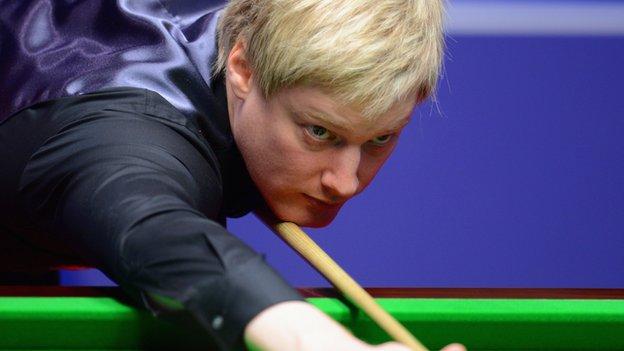 Former world champion Neil Robertson reached the quarter-finals of the World Championship with a 13-9 win over qualifier David Gilbert.

Having gone behind 5-3 and 10-6 in the opening sessions, Gilbert rallied with breaks of 121 and 67 but the deficit proved too much for him.

Robertson needed only three frames to clinch victory in the final session at The Crucible.

He will face either Mark Williams or Ronnie O'Sullivan in the next round.

But with eight seeds already out, the Melbourne potter has a real chance of equalling his 2010 World Championship win.

The Englishman had started better, establishing a 3-1 lead in the best-of-25-frame tie. Gilbert, from Tamworth, looked composed when cueing and played a precise tactical game that reduced Robertson's time at the table in the early stages of Thursday's opening session.

Having trailed at the interval, Robertson returned rejuvenated, knocking in two centuries to take an advantage he did not subsequently surrender, leading 5-3 going into the second session.

The Australian then took control of the match with breaks of 77, 82 and 92 but Gilbert dug deep to pull two frames back, including a composed, frame-winning 75 to go back within one frame at 6-5.

Robertson began to show his class and took the following four frames, all in single visits, to establish a five-frame advantage. He then broke down in the 16th frame and saw his opponent do just enough to snatch the last, giving him a glimmer of hope going into Friday evening's final session.

However Gilbert was unable to bridge the gap with Robertson taking the final three frames he needed to fix up an intriguing clash against Williams or O'Sullivan.