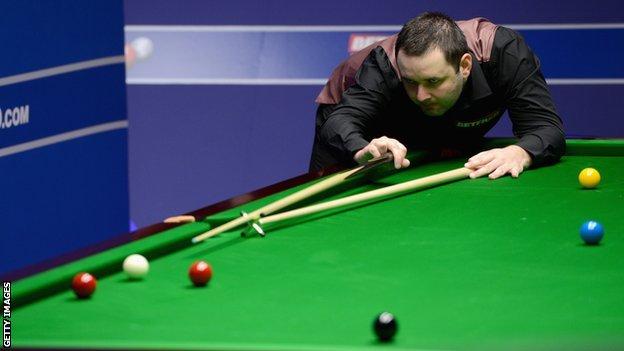 Stephen Maguire reached the semi-finals of the World Championship after a 13-2 victory over Stephen Hendry.

Leading 7-1 after a dazzling first session, Maguire went further ahead by taking the first four frames of the second session, including a 125 break.

Despite Hendry pulling a frame back, Maguire won the next two to seal the victory with a session to spare.

Seven-time world champion Hendry announced his retirement from the sport after the heavy defeat.

The shock news of his immediate departure from playing snooker overshadowed Maguire's win.

Hendry, the most successful player to ever compete at the Crucible, made the announcement in the news conference after the match.

Having won the UK Championship in 2004, great things were expected from Maguire, but he has never been able to replicate that form until now.

His best run at the Crucible came in 2007, when he lost 17-15 in the semi-final to eventual champion John Higgins.

But his demolition job on the 'King of the Crucible' will give him the belief and confidence to go one step further.

Maguire was doing to Hendry what his opponent had done to other rivals for years, showing no mercy and piling on the misery.

Winning the first four frames of the evening session which included a wonderful 125 break put Maguire on the verge of victory, and although Hendry managed to pinch one, his compatriot won the next with knock of 61.

Maguire took the 14th for the win with a session to spare and sets up a meeting with either Ali Carter or Jamie Jones in the semi-final.

In the first session, Maguire had raced to a 7-1 lead and was utterly dominant having comfortably won the first six frames.

A break of 65 allowed Hendry to pull one back, but Maguire ended the session in style with a knock of 95.