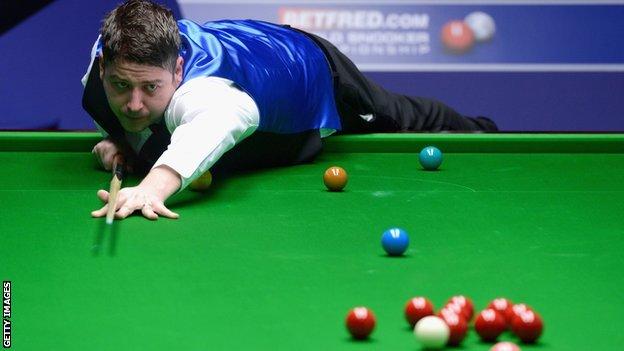 Matthew Stevens swiftly collected the two frames he needed to complete a ruthless 13-5 victory over Ryan Day in their World Championship quarter-final.

Day led 5-2 after two century breaks but his fellow Welshman won the last frame of the first session and all eight of the second to move 11-5 clear.

The two-time Crucible finalist edged a tight opening frame on Wednesday and took the next to make it 11 in a row.

It is the sixth occasion Stevens, 34, has reached the last four, but the first time since 2005, the year he lost in the final to Shaun Murphy.

"It's been a long few years," the Carmarthen-based cueman, who returned to the elite top 16 last year after four years in the doldrums, told BBC Sport. "It has been disappointing watching all the other guys having success here when years ago I was getting to the semis or quarter-finals almost every year.

"Being in the later stages of this event means the world to me. It is what I practise for, and I am very proud of myself."

Stevens admitted he did not need to find anything approaching his best form though to fend off his good friend Day, whose performance deteriorated badly on Tuesday in a low-quality evening session in which the highest breaks were 59 and 63 from Stevens.

"Last night [Tuesday] was very strange," he added. "Both of us struggled, and it was very tough for Ryan. I don't know what was happening to be honest.

"It was tough to play against. Sometimes you've just got to dig in there and I managed to do that a bit better.

"But snooker's not all about potting and making breaks, and sometimes you do struggle and you've got to stick in there."

Day, who was playing in his third Crucible quarter-final in five years, has yet to progress beyond the last-eight stage in Sheffield.

"I had chances to go 6-2 up but that didn't really have an effect on the evening session," he said. "I had plenty of chances, but it just spiralled out of control. It is very disappointing."

Meanwhile, 2008 finalist Carter moved into the semi-finals after edging past debutant Jones 13-11.

The Welshman has been a breath of fresh air on the championship, and after falling 12-8 behind, mounted a spirited comeback which included a break of 64.

But Carter, who defeated Judd Trump in the previous round, showed his experience and took the 24th frame to advance into his second semi-final in three years.

Jones racked up his sixth and seventh centuries of his debut Crucible campaign - more than any other player - but trailed Carter 9-7 after the second session.

The 24-year-old from Neath had already knocked in a sublime 127 clearance as the first four frames were shared but, resuming 5-3 down, he made successive clearances of 138 - the second-highest break of the tournament - and 132 - to draw level at 6-6 after Carter had moved 6-4 ahead.

But the Essex man reasserted his authority after the mid-session interval to take the next three frames, including a break of 83 in the 15th frame, to lead 9-6 before Jones won the final frame on the pink to stay in touch.