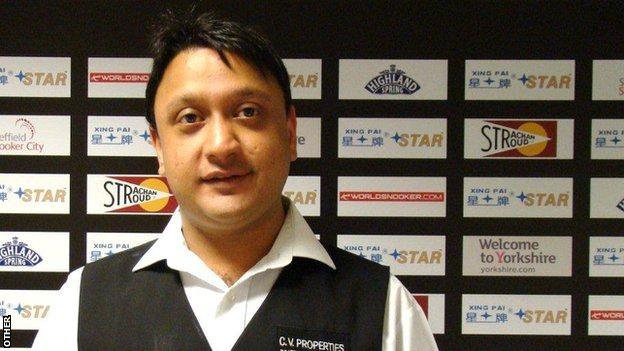 World number 47 Joe Jogia has been suspended by the World Professional Billiards and Snooker Association (WPBSA) pending the result of a betting investigation.

Jogia, 36, withdrew from his match against Matthew Selt in the Snooker Shoot-out in January with a leg injury.

It is understood an unusually large number of small bets were placed on Selt to win the match.

A WPBSA statement said a formal hearing will take place on 25 July.

The statement said: "As a result of the reported unusual betting patterns on the match between Matthew Selt and Joe Jogia that was due to take place at the Sky Snooker Shoot-out at Blackpool on 28 January 2012, Nigel Mawer, the chairman of the WPBSA disciplinary committee launched an investigation.

"The available evidence has been considered and in accordance with the disciplinary rules, he [Mawer] has decided that there is a case for Joe Jogia to answer in relation to a breach of the WPBSA members rules, betting rules."

The sport's governing body added that it was their chairman Jason Ferguson who decided the Leicester man should be suspended from the tour until the case had been completed.

Ferguson had indicated at the time that he was aware of Jogia's injury before he pulled out of the Blackpool event.

Last season, Jogia successfully negotiated his way through the qualifying rounds to make his first appearance in the televised UK Championship in December, where he lost 6-4 to Welshman Mark Williams in the last 32.