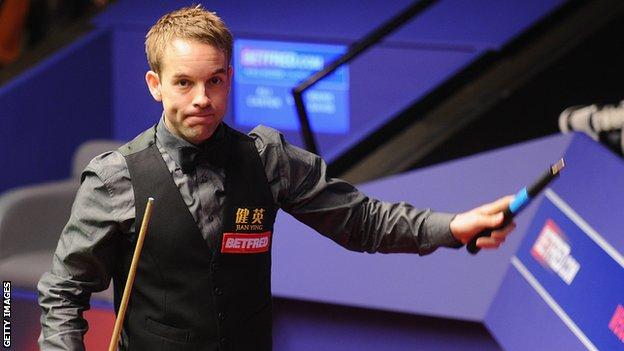 "I haven't been flying much. The weather's been rubbish hasn't it?" says the man nicknamed 'The Captain', who owns a Cessna plane.

"It's enjoyable but I don't think I'll do it after my career because I probably won't enjoy working for someone else.

"In snooker, feathers have been ruffled because people are feeling like they are employees of the game. Which isn't how we used to be."

The feather-ruffling in question has been performed by Barry Hearn, the chairman of World Snooker, whose changes to the game have included increasing the number of international ranking events.

World Snooker says players are not obliged to enter every tournament and for the young upstarts the opportunities are endless.

For a 32-year-old with a young family, it is a labour of love.

"If I was 17 again starting off it's brilliant," Carter told BBC Sport. "Now I'm almost 33 and I've got a little boy, I want to be spending time with him. I don't want to be going down the motorway and playing in a PTC (Players Tour Championship) event.

"But the way the tour is structured you get penalised if you don't go to nearly every event because Barry decided to put ranking points in almost every event.

"Our arms are up our backs to a certain extent to play in these events."

The globe-trotting begins in earnest this week, with the Wuxi Classic - and its valuable ranking points - in China, before another ranking event in Australia less than two weeks later.

For Carter, whose diet directly influences his illness, jet-setting is far from glamorous.

Or as he puts it: "Going to China is going to be an absolute nightmare.

"The food out there is totally different. World Snooker have said they're going to help me out. They're going to get some food in the hotel for me to eat, so we'll watch this space.

"It's adding up to be a lot more stressful than it used to be in my opinion."

Carter's fellow Essex-cueman Ronnie O'Sullivan initially hailed the installation of Hearn as the game's chief in 2009, but he has since soured, accusing the entrepreneur of "blackmailing" the sport's stars.

He has subsequently announced citing his irritation with the requirement to sign a players' contract in order to compete.

Carter, whose two World Championship final appearances have ended in defeat at the hands of 'The Rocket', but does not have the luxury of four world titles and over £6m of career winnings to fall back on.

"The way the game is going, playing every weekend doesn't suit me one bit, like it doesn't suit Ronnie," he said.

"He doesn't want to be playing every other week and neither do I. I just don't want to be doing it. It's going back to the pro-am days now playing best of sevens.

"It's difficult because snooker players have always done what they've wanted to do. It's not very nice being told what you've got to do now.

"But that's the way Barry Hearn sees it so that's what we've got to do unfortunately."

Away from life behind the cue, Colchester-born Carter's own battle with Crohn's, an autoimmune disorder that affects the digestive system, continues.

He seemed to have it under control for this year's outing at the Crucible, where he defied his 17th-place ranking to go all the way to the final,

"Everyone was going on like I'm cured which is not the case with Crohn's, it can rear its ugly head whenever," he explained.

"It's trial and error with loads of different foods.

"Obviously before I went, if somebody had said 'you'll get to the final, will you take it?' I would have. I probably would have taken a semi-final.

"It was very disappointing to lose but it's put a few ranking points in the bank. Hopefully I can get myself higher up the rankings.

"Getting to the final has given me some confidence and I want to get into the top eight because then I can pick my calendar."

Carter speaks like a man who has fallen out of love with snooker, as if the baize has lost its gloss.

He insists that is not the case and, with some luck, hopes to be remembered as a world champion, rather than an almost-world champion.

"I do it enjoy it don't get me wrong. But like everything I enjoy it on my terms," he said.

"I still feel if I'm playing well. I've got a lot to offer in the game and I can win some tournaments. I'd be turning my back on that if I quit.

"A few people have got to one world final, but getting to two has given me confidence because you must be able to compete over long sessions and matches.

"Hopefully my time will come."